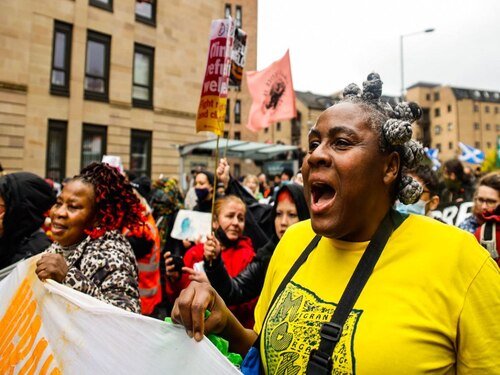 Our correspondents Paul Brown and Alex Kirby are in Glasgow covering COP 26. This is Brown’s account of Saturday’s rally through the streets of the city.

Despite the rain that seemed to come down sideways in the wind, the march of 100,000 climate protestors in Glasgow on Saturday had a carnival atmosphere with 10 bands and dozens of drummers keeping up the spirits.

But underlying the good nature of the demonstrators was a rage at the lack of action at COP 26. This was borne out by the hundreds of banners demanding serious progress.

Although the crowd was mostly made up of Scots, there were many nationalities present including some people from inside the COP 26 conference centre, in a gesture of mutual support.

Apart from the arrest of 21 scientists away from the march who glued and chained themselves together to block a road over the Clyde, there were no disruptions on the march. The police had cordoned off the three-mile route through the city centre.

Standing at 168 West George Street, Glasgow on the steps of St James Place, Wealth Management, roughly half-way along the march route, it took a full two hours for the banner-waving crowd to pass.

The banners were an entertainment in themselves—many of them homemade painted on cardboard. The rain had made the paint run on some but others were street wide, needing a line of 10 marchers to hold them. Among the slogans: “Sea levels are rising, so are we”; “ Bad politicians run the Planet”; “Migration, where on earth will we go”; “Keep 1.5 Alive.”

There were people in fancy dress but also a group of doctors and nurses in deadly earnest. Their banner read chillingly: “We deliver babies to a dying planet.”

Carrying her own homemade banner “Grannies Against Global Warming”, Liz Wignall, aged 71, had come that morning from Edinburgh on a convoy of 15 buses to join the march. “I am doing this for future generations,” she told The Energy Mix. “The situation is already critical for the poorer nations of the Earth and I am doing this in solidarity with them. I told my three grandchildren I was going to come and they were all in favour.”

Rosie, aged 11, with a banner reading “Solution not Pollution”, and her sister nine-year-old Elspie holding up “Our planet Our future”, had persuaded their parents to drive from Stirling, 40 miles away, so they could join the march.

Their parents keeping a close eye on them were clearly proud of their young eco-warriors.

Among the many families, students, and trade unionists were some more seasoned climate protestors. A group dressed in white overalls pretending to spray paint styled themselves Greenwash Busters. Their dancing display intended to show nations “greenwashing” the climate talks had the banner “Claiming to care about the natural world while knowingly destroying it.”

They were all from Bristol in England’s West Country and spending a week protesting outside the climate talks. One of them was Steve Melia, a lecturer on sustainable transport from the West Of England University in Bristol. He had given evidence to the UK Citizens Assembly that had recommended radical action to combat climate change, but as he put it “was ignored by the government.”

“I am here because this COP is probably going to fail the world, and because anyone who believes that this government has a serious plan to tackle climate change has not been looking at the facts,” Melia said. “Every announcement is to make it sound rosy for the media, but dig down and nothing is happening.”

Another greenwash buster was Jill Bird, a member of the Evergreens Group from Bristol, who had been arrested in London for criminal damage for spraying slogans on the pavement but was waiting to see if she would be charged.

Both of them had also given evidence at a public inquiry in support of North Somerset Council, which had refused permission for an expansion of Bristol Airport. The owners of the airport, the Ontario Teachers’ Pension Fund, want the expansion to go ahead to make money, even though teachers from the Canadian province had supported the objectors. A decision is still awaited.

Other placards represented many of the groups struggling to get their voices heard inside the climate talks. For example “Protect indigenous people, end colonialism”; “The World’s Third Pole is Melting”; “Stop Funding Gas in Mozambique”; and “No new oil fields, stop Cambo”, a reference to the expectation that the British government will sanction a giant new oil field off Scotland as soon as COP 26 ends.

There were face masks depicting unpopular world leaders like Presidents Trump, Putin, and Bolsonaro, and Prime Minister Scott Morrison from Australia along with his friend media mogul Rupert Murdoch. Perhaps the least popular figure on the march was UK Prime Minister Boris Johnson, who was characterized as “Bollocks Johnson.”

Five members of the royal family were also depicted with a giant sign quoting a remark that Queen Elizabeth was overheard to make last week. It read: “It is irritating when they talk and don’t act.”

It remains to be seen whether this tremendous show of solidarity, echoed by dozens of other marches in cities across the world—summed up by the banner “Good planets are hard to find, let us look after Mother Earth”—will have any effect on the last week of negotiations. We will only know that, and the fate civilization faces, in about six days’ time, when COP 26 ends.

‘NON-SENSICAL’: Energy, Fossil Fuels Get No Mention in Early Outline of COP 26 Declaration