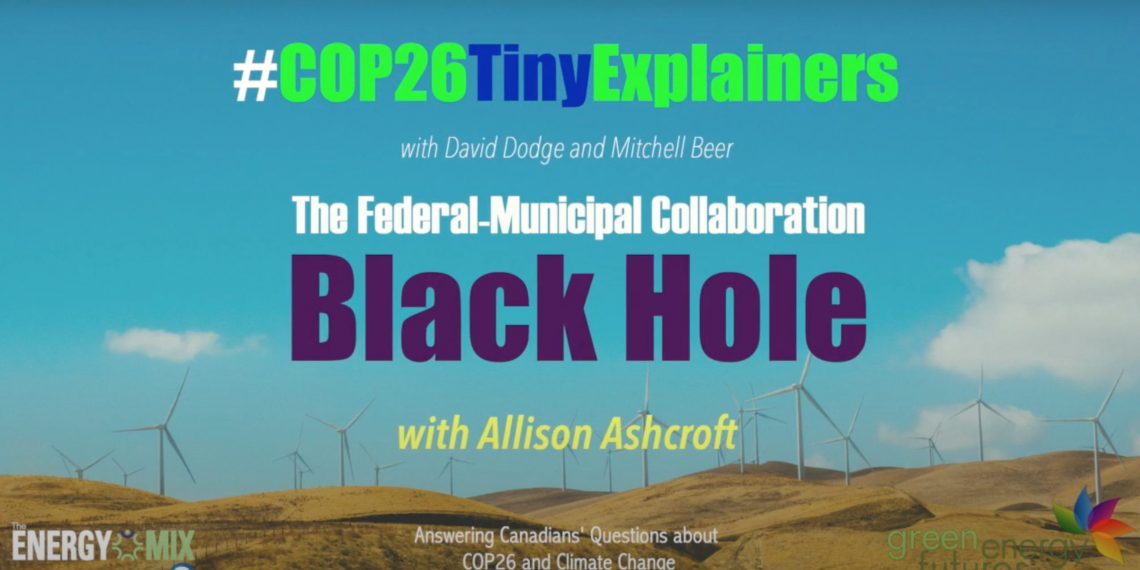 We have today’s questions thanks to Elizabeth Valestuk Henderson in Calgary, Alberta: How do federal leaders engage leaders from our urban areas to address the sustainability improvements we make to the built environment? And how do those action tie in with the admirable vision statements at an event like COP 26?

Cities are the level of government where it’s most obvious that buildings, transportation, waste, and land use decisions all affect each other, said Allison Ashcroft, outgoing managing director of Canadian Urban Sustainability Practitioners.

Municipalities are also an essential place to take action on the high-level ambition Canadians hope to see from this year’s United Nations climate conference, COP 26, Ashcroft told The Energy Mix, in the latest edition of the #COP26TinyExplainers video series.

But despite the need for cooperation across the levels of government, “it’s fairly limited,” she said. “Procedurally, there’s little to no direct engagement between ministers and elected officials,” nor between policy staff at key federal governments and practitioners in local government.

That’s a “deficit”, Ashcroft said, given the importance of connecting big-picture policy and strategy with the front-line realities cities live with every day.

“Obviously, if you’re working in a city, you understand the challenges,” she said. In the built environment, “you understand what kind of buildings you have, the age of your buildings, your tenures, your rentals, your ownership, and some of the challenges people are having in decarbonizing those buildings. When you’re sitting in Ottawa, you don’t necessarily understand the differences between Winnipeg and Saskatoon and Victoria.”

For that matter, while Vancouver looks like a single, big city to most people from farther away, local citizens and sustainability practitioners know that it’s made up of 22 separate municipalities—creating serious headaches when those communities try to get anything done in concert.

Henderson asked how the “admirable vision statements” coming out of an event like COP 26 can be grounded in local action, so that a change in political leadership doesn’t endanger past commitments. Ashcroft said cities can still get climate work done, even in a challenging political environment—by grounding that work in the priorities communities set for themselves, even if it means renaming the program.

When she first went to work for the City of Victoria as an environmental planner, she recalled, “I was given the lane of greenhouse gases and energy, and it was the same for all the cities I worked with in the network. But no one is working purely on that anymore, particularly in Canada, and particularly where I live out on the West Coast.” In most big cities, “if you’re not working on housing affordability and talking about equity, no one’s listening, not your council and not your public,” she added, because people were already struggling before a pandemic that made the situation much worse.

But “through our poverty reduction strategies at cities, and through housing affordability strategies, we can start to layer in some of this information for those who work in social planning around what people are spending on home energy costs that are increasingly 10%, 15%, 20% of their after-tax income.”

Which brought the conversation back full circle to Henderson’s original question about the built environment. “We have non-profits and governments running those buildings whose entire mandate is to provide affordable housing, and it’s failing because we’re not looking at the operating costs of those buildings for people,” Ashcroft said. Last summer’s heat domes also shone a light on the severe health risks of living in substandard housing.

Municipalities don’t have the money to solve those problems on their own, she said. But they do have the community connections and knowledge to design programs that work.