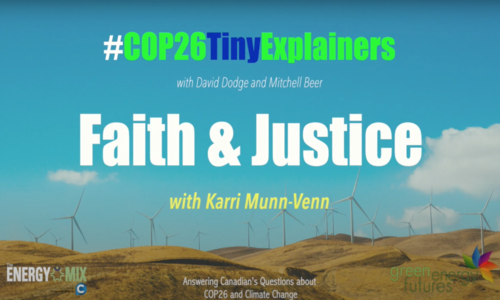 Today’s question: What are the major social and environmental justice issues at this year’s United Nations climate conference, COP 26, and what would a win look like?

A coalition of three dozen faith-based organizations is urging the Canadian government to embrace a three-part agenda during the COP, said Karri Munn-Venn, senior policy analyst at Citizens for Public Justice.

The groups are urging Ottawa to increase the country’s climate ambition and invest in a just transition for fossil fuel workers and communities, implement the UN Declaration on the Rights of Indigenous Peoples (UNDRIP), and increase international funding for climate change adaptation and mitigation, Munn-Venn told The Energy Mix, in the latest edition of the #COP26TinyExplainers video series.

“It’s been an interesting year, because in all three of those areas, we’ve seen some progress but of course there’s still a gap,” Munn-Venn said. “There’s still a big disconnect between the level of ambition that Canada has and the measures related to those other factors, and where we’re actually going.”

But the difference between rhetoric and action makes it hard to define what a clear win would look like.

“They espouse an understanding of the urgency of action, the need for ambitious measures to be put in place,” she explained. But “I feel like what we’re hearing is a reiteration of previous commitments.” In spite of “a lot of good words around on concern and compassion and justice,” some of Canada’s major announcements—like the landmark decision to ban international public financing for oil, gas, and coal projects—raise as many questions as they answer.

With the public finance pledge, Munn-Venn and other climate policy and campaign specialists are left wondering why it applies to new projects but not existing ones, to international but not domestic funding.

“Those are big questions,” she said. “So I think it will be some time yet before we can actually tell if this particular COP has an impact on Canadian climate and energy.”

We asked Munn-Venn what it will take to get a faith and social justice perspective into the negotiating rooms in Glasgow.

“There’s a hint or a clue to that in the title of the initiative we’ve formed, For the Love of Creation,” she replied. “When people look at religious texts, they’re really clear on poverty,” but “there’s less awareness of the way climate or environmental issues are reflected in what people of faith are invited to do.”

That’s partly a matter of the meaningful personal experiences that can bring anyone—from a climate campaigner in the streets of Glasgow to a seasoned negotiator in a windowless room—back to a connection with the places and spaces that matter to them most.

“Where I spend a lot of my time is around creating the connections we have with the natural world,” she said. “Because everybody has that place, whether it’s your grandma’s farm that you visited when you were a kid, or the lake you would swim in on summer vacation.” Part of the work of climate advocacy, she said, is “encouraging people to find, to remember those places, to remember those connections, to remember the feelings they had with that, and to recognize that at the end of the day, a lot of what we’re talking about is preserving those places.”

But protecting those small, essential beloved places depends on big-picture changes in systems and structures.

“One of my big takeaways so far, and that I think we’ll carry into [the second week of the COP], is that we absolutely need to continue to press for the large-scale system changes that need to happen to reduce emissions to the levels that are needed,” Munn-Venn said. “We also need to continue to build conversation, to build community, to have dialogue, so that we can encourage one another in all our small ways to move forward. Because it’s through that kind of engagement that we’re going to shift minds and hearts around.”

Daily COVID Test, Hours to Wait, Miles to Walk, and No Maps: A Day in the Life at COP 26