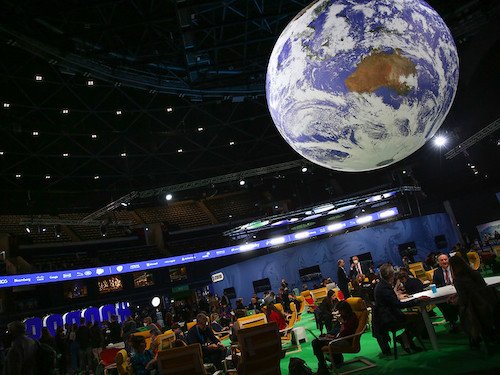 This story has been updated to include The Guardian’s account of Selwyn Hart’s response to Birol.

Three days of triumphant funding and program announcements collided with deepening alarm and mistrust from veteran climate policy analysts on Thursday, as a media panel organized by Climate Action Network-International picked apart the optimistic narrative that emerged in the opening segments of this year’s United Nations climate change conference, COP 26, in Glasgow.

The tone on the late morning panel was in marked contrast to an appearance hours later by Fatih Birol, executive director of the International Energy Agency, at a high-profile event hosted by the Powering Past Coal Alliance.

“We all followed the discussions, and there was a lot of pessimism, skepticism, about whether or not this COP would deliver anything at all,” Birol said. (He might have noted that some of that pessimism came from UK Prime Minister Boris Johnson, who as head of government of the host country would normally be expected to be twisting arms for the best possible outcome rather than declaring defeat before the conference had begun.)

But instead, the early days of the conference saw a flurry of new commitments to climate action, beginning with India’s pledge to hit net-zero by 2070 and a new 2030 methane target adopted by more than 100 countries. “If all those pledges were to be implemented, the temperature increase [caused by climate change] could be limited to 1.8°C,” Birol said. “We’ll see in nine days, but for the moment that’s an achievement to celebrate.”

Separately, researchers at the University of Melbourne calculated the potential at 1.9°C. Both estimates were still well short of the Paris Agreement goal of 1.5°C average global warming. But they pointed toward a major, life-saving improvement on the devastating 2.7°C projected last week in the latest Emissions Gap Report issued by the UN Environment Programme (UNEP).

“This is a landmark moment,” the IEA said in a release. “It is the first time that governments have come forward with targets of sufficient ambition to hold global warming to below 2°C.”

But after Birol spoke, the UN’s assistant secretary-general for climate change threw a damper on his enthusiasm, The Guardian reports.

“Our fight is far from over,” Selwyn Hart told the session. “Fatih, I heard your numbers, but based on the NDCs [the Nationally Determined Contributions that embody governments’ promises under the Paris agreement] that have been submitted, the world is on a 2.7°C pathway, a catastrophic pathway, and therefore we are a long way away from keeping the 1.5°C goal of the Paris Agreement alive.”

With success hinging on multiple players keeping their promises for decades into the future, “we cannot be complacent,” Hart added. “We cannot celebrate before we’ve done the job. We must recognize that this is a fight that we cannot afford to lose.”

The four speakers on the CAN panel added another dimension to that conversation, with one of them stressing that even the 2.7°C pathway is still very much a work in progress.

The COP 26 outcomes so far point to a “disastrous future, particularly for the disadvantaged communities and countries on the front lines” of the climate emergency, said Power Shift Africa Director Mohamed Adow. “People across the world are really suffering from extreme weather events” that are becoming more regular and frequent, he said, yet there has been no meaningful support for developing countries to build the adaptive capacity to meet the crisis.

“A lot of the NDCs the developing countries put forward, which put us on a path to 2.7°, are in fact contingent on international support” that has not been forthcoming from the world’s richest economies, he said. So “we have to actually unlock the support to implement the current NDCs as we continue to pressure on countries to ratchet and increase ambition.”

Adow contrasted UN climate finance envoy Mark Carney’s dramatic announcement that more than 450 businesses representing US$130 trillion assets had signed on to net-zero action with wealthy countries’ failure to mobilize $100 billion per year for international climate finance, as they first promised to do in 2009.

“So look at the scale,” he said. “You would think you would honour the old promise you made 20 years ago,” at a time when “we need to see real action, real money.”

Jean Su, energy justice director and senior attorney at the U.S. Center for Biological Diversity, cited the announcement just an hour before that 21 countries and five multilateral financial institutions would eliminate public financing for international coal, oil, and gas projects. “This is a historic commitment” and a “very welcome development,” she said, with potential to shift $18 billion per year from fossil fuels to renewable energy investment.

But the announcement left out three countries—China, Japan, and South Korea—that account for nearly half of the international public financing for fossil fuel projects, and even those that signed on said nothing yesterday about their domestic activities, Su said.

“All of us know very clearly that we have no time any longer for fossil fuels,” she said. “This is the end of an era.” But between 2018 and 2020, countries directed at least $188 billion to fossil fuels, when “all of that financing desperately needs to go to renewable energy, particularly in the Global South.”

Rwandan climate activist Ineza Umuhoza Grace, co-director of the Loss and Damage Youth Coalition, called for “real political action” at this COP to address climate impacts and suffering that go beyond countries’ capacity to adapt. “No country will be spared, the poorest countries are least equipped to cope with loss and damage, and they need real support now,” she said.

Bloomberg News observed yesterday that many of the major announcements of the last few days “unravel under closer scrutiny”. And a close look at some of the key moments in the first week of COP 26 show that all will depend on whether the luminaries who took to the stage in Glasgow meant what they were saying, and whether they intend to keep their promises.

• India’s Prime Minister Narendra Modi promised a 2070 deadline to bring his country’s greenhouse gas emissions to net-zero. The top-line number was backed by plans to install 500 gigawatts of non-fossil electricity and meet half of the country’s power needs from renewables by 2030, reduce its “total projected carbon emissions” by a billion tonnes by the end of this decade, and reduce the carbon intensity of its economy by 45%. But all of that was contingent on the international financing that rich countries have so far failed to deliver.

• The more than 100 countries that pledged to cut their methane emissions 30% by 2030 were unable to persuade some of the world’s biggest methane polluters to sign on to their statement. And their target fell short of the 50% by 2030 that scientists were pressing for, or even the 45% recommended by UNEP in May.

• Carney’s bombshell announcement with its $130-trillion figure was only made possible by flexible rules of engagement that allow wide latitude for each of the participating financial institutions to choose their path to net-zero by 2050—even if it means continuing new investment in fossil fuels. A spokesperson for the Glasgow Financial Alliance for Net Zero told The Energy Mix that was the only way to get skittish bankers to sign on.

• Yesterday’s dramatic announcement on public financing of international fossil projects was a voluntary undertaking that left out three of the countries that contribute most to the problem, the Washington Post reports. Although campaigners are still optimistic: “We hope this will lead to the same domino effect that we’ve seen with coal finance,” Laurie van der Burg, global public finance campaign manager with Oil Change International, told the Post.

• The new Glasgow Forest Pact, oversold by U.K. Prime Minister Boris Johnson’s office as “the biggest step forward in protecting the world’s forests in a generation,” was severely underfunded from the start, and ran into backtracking within a couple of days, with Indonesia claiming it never agreed to end deforestation by 2030. “It is important to move beyond mere narrative, rhetoric, arbitrary targets, and soundbites,” said Mahendra Siregar, the country’s vice minister for foreign affairs.

The interwoven mix of good news and bad, spin and substance is now rolling into the technical negotiations that will ultimately determine the success of COP 26. At Thursday morning’s media briefing, Eddy Pérez—the astonishingly knowledgeable climate diplomacy veteran from Climate Action Network-Canada who co-chairs CAN-International’s finance committee—pointed to the more than 20 items on negotiators’ finance agenda. Then he rhymed off a list of other complex, essential topics that urgently need attention from negotiators and, ultimately, at least some degree of consensus from 195 countries.

That was just hours before COP President Alok Sharma issued a memo to negotiating teams that pushed for draft text to “advance quickly” in the early part of next week—to allow time, the British politician said, for document preparation and translation before the conference ends.

2 Comments To "1.8°C IN SIGHT? Only If Everyone Keeps Their Promises"

Does “direct public financing” include all the subsidies in royalty programmes and capital gains tax etc, in other words the backend, indirect subsidies?

And note permanent deforestation only refers to conversion of forest land to other uses. Clearcutting and plantations are still fine…..

Oh, absolutely, limitations and caveats galore! The details will all come out in the weeks and months ahead…so we’ll all have to be watching, listening, and mobilizing like mad.