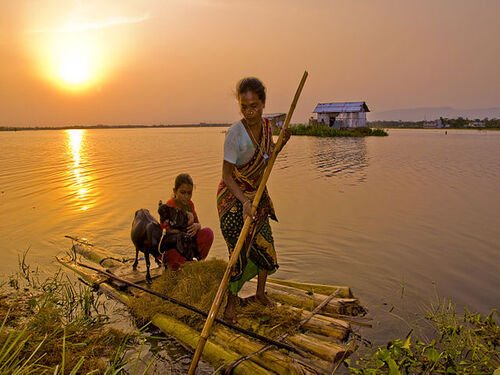 The Climate Vulnerable Forum (CVF)—representing more than 1.2 billion people in countries most exposed to the climate crisis—is demanding that COP 26 adopt a Climate Emergency Pact “to rebuild confidence in international climate cooperation, accelerate adaptation, and keep 1.5°C within reach.”

A day after Scottish First Minister Nicola Sturgeon announced a £1-million contribution to help vulnerable countries cope with loss and damage caused by the unavoidable impacts of climate change, the CVF, whose expanding membership comes from every continent and region save North America and Europe, adopted the Dhaka-Glasgow Declaration, a comprehensive list of demands that communicates their top priorities to the rest of the 30,000 COP 26 attendees, most particularly the world’s high emitters.

The declaration calls on the COP Presidency and the UN climate secretariat to adopt a Climate Emergency Pact that includes a 2020-2024 deilvery plan for the long-promised (since 2009), recently-delayed US$100 billion per year in international climate finance, split equally between adaptation and mitigation.

“We need the G20 countries to step up their climate finance commitments,” Marshall Islands Health Minister Bruce Milimon told the CVF’s leaders’ meeting. He added that the 50-50 split in funds is “critical” for nations like his own.

Vulnerable countries in fact need trillions, not billions of dollars of investment, especially considering the growing scope of climate impacts on the world’s oceans, the declaration states. So wealthy countries must commit to further annual financing post-2025 that will take into account the greater adaptation and mitigation demands imposed on members of the CVF.

The declaration further demands annual, independent monitoring of the delivery plan, with the help of the International Monetary Fund. “Climate finance effectiveness has far to go,” the CVF says, and weakly-capitalized financing mechanisms need to be strengthened in future, with at least 5% of the proceeds from 1.5°C-aligned carbon markets used to assist the world’s most climate vulnerable nations.

Climate finance must also reverse the increasing share of climate finance delivered as loans, rather than grants, and help lessen a debt burden that CVF nations have seen compounded by the COVID-19 pandemic.

“You [climate vulnerable nations] stand on the front lines of the unfolding COVID-19 crisis and escalating climate emergency,” UN Secretary General António Guterres told session participants, “the first to suffer and last to receive help. Solidarity is missing,” and “we simply must do more.”

He lent his support to the CVF Climate Emergency Pact, affirming that “this is how we keep 1.5°C alive.”

The CVF also called for “full substantiation and operationalization” of adaptation goals under the Paris agreement, with increased support for financing, technology transfer, and “locally-led community action” to empower vulnerable communities. And it urged COP delegates to “consider adopting ambitious targets in domestic maritime emissions for a transition to zero emissions that leaves no one behind.”

On Wednesday, Bangladesh Foreign Minister AK Abdul Momen said  what is at stake in these deliberations “is everything,” describing the G20’s failure to deliver on climate finance for vulnerable countries as a “major justice issue.” He added that 37 CVF nations have pledged to pursue their own climate prosperity plans, modelled on a Bangladeshi initiative named for the country’s founder, Sheikh Mujibur Rahman. Described by Momen as a “low-carbon strategy to move Bangladesh from climate resilience to climate prosperity,” the “Mujib” plan has an implementation date of 2030.

CVF members are “doing our best to save this planet Earth, the only home we have,” Momen said. “If we all agree and there is political will, we can save it. We cannot do it alone, [but] we can do it together, in partnership.”

Collectively, those 1.2 billion people are responsible for 5% of global carbon emissions.