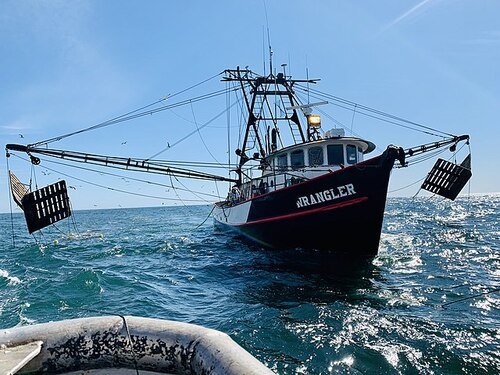 As the UN’s annual climate jamboree, COP 26, ploughs steadily onwards in Glasgow, Scotland, news comes of something else to worry about: seabed carbon.

The carbon dioxide we’re all intent on removing before it heats the planet to intolerable levels is all contained in the land, the oceans, and the atmosphere, isn’t it? Well no, not exactly. It turns out there’s an appreciable amount of it stored in the upper reaches of the seas around the British coast—not in the water, but in the seabed itself.

Some of this seabed carbon lies just beneath shallow seas where it is liable to be churned up and set free by passing trawlers or—in a neat illustration of the way that many environmental solutions bring further havoc in their wake—by crews installing the offshore wind turbines designed specifically to, er, forestall climate change.

Its known scale is alarming. The top layer of the North Sea seabed, between the British east coast and western Norway, stores 100 million tonnes of seabed carbon: a 10-centimetre layer contains as much as 20% of the carbon stored in the UK’s forests.

But estimates of the full extent of the submarine carbon deposits really are alarming. Scientists say the sediments containing them may reach tens or even hundreds of metres below the seabed, so the carbon may be far more extensive than what’s known so far. The deposits are unlikely to be restricted to the North Sea, but are liable to be widespread throughout British waters. And the problem of unrecognized leaking carbon deposits is not the UK’s alone.

British environmental groups argue the government has not measured or managed this underwater carbon source, which is examined in a study by the Scottish Association for Marine Science (SAMS).

Releases of the submarine carbon caused by bottom trawling—the disturbance of the seabed with heavy fishing gear—total about a billion tonnes of CO2 annually, as much as that produced by the aviation industry, according to a study published in the journal Nature.

Earlier this year, the UK government announced plans to ban bottom trawling, described as the most destructive form of fishing, in four large areas of sea off the coast of England, using what are described as post-Brexit powers to protect marine life.

The biggest of the four areas is Dogger Bank in the North Sea, where Greenpeace dropped boulders in 2020 to stop trawlers fishing. The largest shallow sandbank in British waters, the Bank is home to common skate and other critically endangered species, including the slow-growing flapper skate, which can reach 2.5 metres in length.

“Over three quarters of the UK is under the sea, yet carbon accounting stops on land, creating a substantial blind spot around the carbon storage potential of UK seas,” said Dr. Simon Walmsley is chief marine adviser at WWF-UK.

“As hosts of the COP 26 climate summit, the UK government has the chance to show global green leadership by investing now to assess, monitor, and protect UK blue carbon. This is a vital part of future-proofing UK fisheries, as well as tackling the climate and nature crisis. Future generations won’t forgive those who fail to act while there is still time.”

Charles Clover is executive director of the Blue Marine Foundation, one of the groups which commissioned the SAMS study. “Belatedly, we are realizing that it is not just emissions from cars, aircraft, power stations, and agriculture that contribute to climate change,” he wrote in the London Times.

“There is an ocean-sized hole in the world’s greenhouse gas inventories and the measures that countries are taking under the UN Framework Convention on Climate Change to tackle them. It is not clear that the UK has fully grasped the global urgency of researching and protecting potentially one of the largest carbon sinks on the planet, the seabed.

“Disturbing the seabed releases carbon—and killing fish, whose feces can lock carbon in the deep sea for hundreds of years, does the same. Yet out there in the oceans, vast trawling fleets grind their way across the continental shelves, free riders on the climate system.

“The government could take some simple measures to help the sea to slow climate change. It could actually protect our marine ‘protected’ areas—95% of which are being trawled or dredged by damaging fishing gear which stir up carbon into the water.”