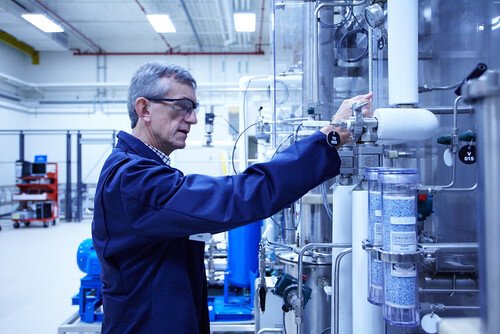 Three prominent CEOs discussed the potential of green hydrogen as a vital climate solution that is poised for rapid expansion at a COP 26 panel hosted by the Colorado-based Rocky Mountain Institute (RMI).

“Technology is not a barrier,” and there is enough customer demand today to scale up green hydrogen production, Gonzalo Sáenz de Miera, climate change director at Spanish electric utility Iberdrola, told the November 4 panel. The green hydrogen sector can already “deploy gigawatts at the scale [needed] to stay in the 1.5° scenario” prescribed by the Intergovernmental Panel on Climate Change, he added.

The panelists said green hydrogen is critical for decarbonizing sectors like steel manufacturing, shipping, and aviation. In contrast to its fossil fuel-dependent competitor “blue hydrogen,” which is (generally) cheaper and often favoured by government subsidies, green hydrogen uses renewable sources to create fuel by electrolyzing water.

But scaling up the green hydrogen sector to meet industrial power needs will be a huge endeavor, said Alex Hewitt, CEO of renewable energy developer CWP Global. He estimated the industry will need to grow to a size of US$8 to $12 trillion to contribute to meeting the 1.5°C target.

The private sector can scale up rapidly and will “rise for the technology challenge,” he added, but governments first need to establish policies focused on bolstering investors’ confidence.

Panelists warned the green hydrogen sector needs to start deploying projects quickly. “We can only do that if there are clear and efficient approvals pathways” created by legislation and government action, said Fortescue Future Industries CEO Julie Shuttleworth.

Shuttleworth later announced an ambitious new commitment by the Green Hydrogen Catapult, a coalition of companies covering the entire green hydrogen supply chain. The coalition committed to secure financing for 45 gigawatts from green hydrogen electrolyzers by 2026, to be deployed by 2027.

“This additional deployment brings the globe very close to the gigawatts necessary to be aligned with the 1.5°C [target], and is absolutely amazing and a great step forward for the planet,” said Shuttleworth.

In addition to reducing emissions, the panelists said the green hydrogen economy can help address the global inequities reinforced by the fossil fuel sector. Responding to a question from the audience, Shuttleworth noted that, like other renewable energy sources, green hydrogen can be introduced almost anywhere, which “really opens up equity for the world.” But companies planning projects need to consider local communities and address their needs first.

The declining cost of renewable power to produce green hydrogen will make it a “competitive option for a lot of countries, not just northern countries,” Sáenz de Miera added.