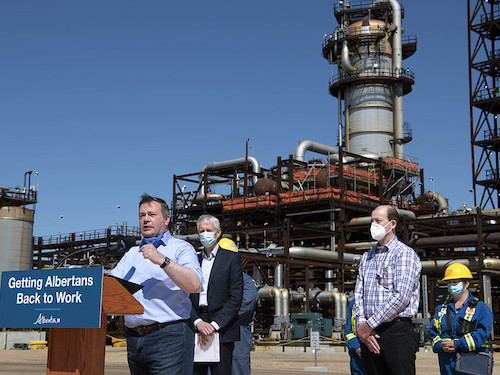 The province with Canada’s largest oil and gas industry has sent one of the country’s smallest delegations to the COP 26 international climate conference where emissions from that sector are under scrutiny.

“It’s incredibly good to be there and learn from these events,” said Keith Brownsey, a political scientist at Mount Royal University. “It’s smart, but apparently we don’t think it’s all that smart.”

New Democrat Opposition Leader Rachel Notley said the United Conservative government has let Albertans down. “Alberta workers need a seat at that table and the UCP made the decision to leave it empty,” she said Wednesday.

A preliminary list of those attending the COP 26 meetings in Glasgow, Scotland, shows that of 200 Canadian delegates, two are from the Alberta government. They are officials from Emissions Reduction Alberta, an agency funding emissions-reducing technologies, and are the province’s only representatives.

Almost every province has sent more delegates or higher-level representatives to the meetings. Newfoundland has nine participants, and Manitoba has six, CP says. Ontario has four, as does the Northwest Territories. Quebec has 36 representatives.

Inuit and Metis groups have more representation than Albertans. So do groups such as the Climate Action Network. Alberta-based fossil giant Suncor Energy has its own delegates.

There are also more Mounties at the meetings than representatives of the province with, by some criteria, the most at stake of any Canadian jurisdiction. [News coverage this week seems to assume that the presence of an oil and gas industry equates with having the most at stake in climate negotiations. Has anyone tried to stabilize a roadbed or town site over melting permafrost, find their home still standing in Lytton, British Columbia, or breathe deeply with fires burning out of control within a couple of kilometres of home?—Ed.]

On Wednesday, Premier Jason Kenney defended his decision to send a small delegation to what he called earlier in the week a “gabfest.”

“We will continue to vigorously defend Alberta’s interests in emissions reduction and economic growth to ensure a strong future, but being part of a crowd of 30,000 is not an effective way of doing so,” he said.

Kenney said it’s more effective to have one-on-one meetings with financial and political leaders. “We’ll continue to have those direct conversations with key decision-makers.”

Brownsey said the government has missed an important chance to gather information, make contacts, and tell Alberta’s story to the rest of the world.

“What goes on at COP has a dramatic impact on us in Alberta,” he said. “Even the Saudis were there, talking about how they were going to reduce emissions. And we sent two delegates?”

Brownsey said being at the conference allows delegates to better understand the positions of other countries. “We don’t know what’s going on. We can read the official documents, but it’s in the off-hours you find out what these groups are really thinking.”

Brownsey said not showing up also leaves the field to a federal Liberal government with which Alberta’s United Conservatives are often at odds. “You complain about them, but do nothing to counter them.”

Notley, who represented Alberta as premier during the COP 21 meeting in Paris, said showing up would have been a good chance to work with Ottawa’s new environment minister. She said such meetings allow Albertans to tell their own story.

“I remember a friend sending me a bunch of things from The Guardian (a U.K. newspaper) talking about all the progressive things the province of Alberta was doing. That story’s not being told in our absence.”

This report by The Canadian Press was first published November 3, 2021.