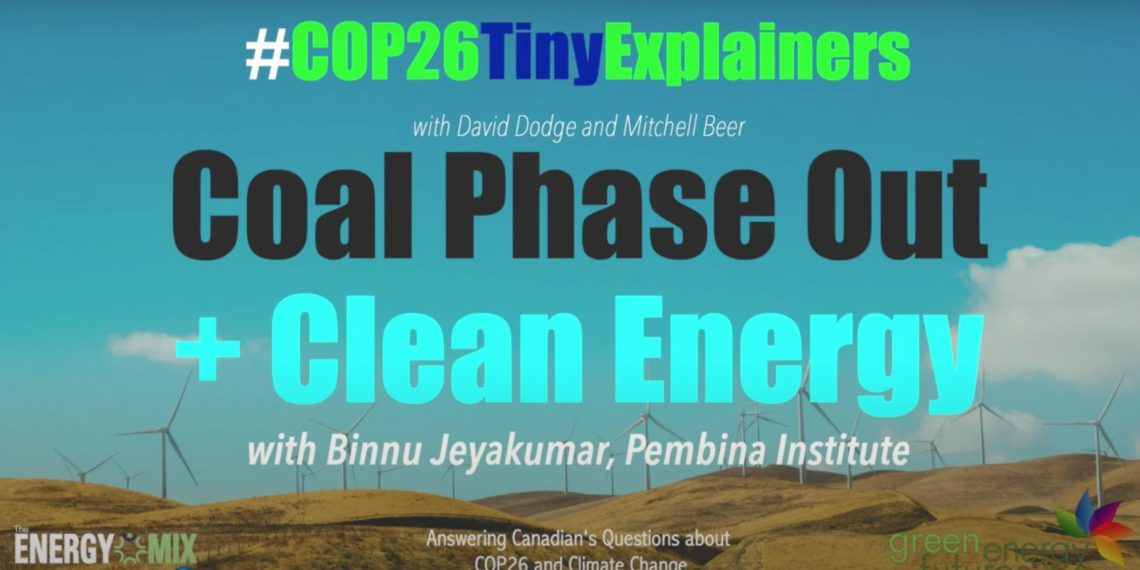 Today’s question: Thursday is Energy Day at COP 26, and two of the top issues are a global coal phaseout and how to decarbonize the power grid. How is Canada addressing those issues in Glasgow?

Find the full video of this interview here.

Canada’s leadership on the coal phaseout so far has been “commendable”, said Binnu Jeyakumar, director of clean energy at the Pembina Institute, with the country co-chairing the Powering Past Coal Alliance and supporting a global phaseout of coal financing.

Canada also made its own commitment to ban thermal coal exports by 2030, Jeyakumar told The Energy Mix, in the latest in a series of #COP26TinyExplainers interviews.

“We do need to accelerate the ban,” she said. “But it sends a strong signal to industry, and it also sets a good example for other countries to follow,” as does Canada’s $1-billion contribution during COP 26 to support the transition off coal with climate investment funds.

“We talk a lot about how phasing out coal and transitioning to a clean grid is really challenging for emerging economies,” she said. “This is now a tangible action that Canada is taking to support those economies to make that transition. I’m really proud to say we’re doing that.”

Grid decarbonization is an area where there’s more work ahead, Jeyakumar said. But progress in that direction ties back to coal, as well: Alberta, the province that accounts for half of the carbon pollution from Canada’s electricity sector, is on track to shutter its last coal plant in 2023—nearly 40 years ahead of its original schedule.

“The conversation a decade ago was that Alberta would still be operating a [coal] plant in 2061,” she recalled. But the accelerated phaseout “raises the urgency of what replaces coal. The investment decisions we make today will shape what our grid looks like for the next 30 or 40 years.

Jeyakumar listed some of the key elements of the “strong implementation plan” Canada will need to bring its grid to net-zero by 2035—like a clean electricity standard and more stringent carbon pricing to speed up renewable energy deployment, limit the country’s investment risk from natural gas plants, and drive infrastructure investments in electricity transmission and storage. Governments will also have to devote the right funding and programmatic support to a just transition for fossil industry workers and communities.

That transition effort will be huge, she added. “We’ll see this everywhere from transmission lines along rural roads to transitioning what our cities look like. So it’s really important to have the buy-in of citizens, and I think we’re there,” with two-thirds of Albertans saying they “actually want to see the provincial government commit to a net-zero economy.”

What’s in it for provincial politicians in places like Alberta and Saskatchewan? “I’d reiterate that economic growth lens again,” she said. With government that aren’t quite onboard with aggressive climate action, “look at what industry is doing. Many of our leading companies have net-zero by 2050 targets. Banks and investors are continuing to invest more in clean energy solutions than in fossil fuels.”

So a good practice for provincial decision-makers is to “pay attention to where those investment funds are going,” and to what helps people and communities.