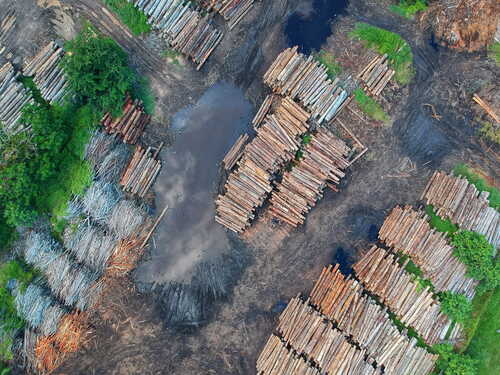 In an ardent display of greenwashing, Brazil’s new emission reduction targets have been presented as a step forward while cunningly allowing the country to actually increase emissions, making the country a strong contender for Climate Action Network-International’s sought-after Fossil of the Day award at this year’s United Nations climate conference, COP 26.

The paper commitment to cut emissions by 50% from 2005 levels comes after the country retroactively revised its reported 2005 emissions. In doing so, Brazil effectively raised the baseline that future emissions are measured against, but did not adjust the reduction percentage accordingly. So despite the impression that Brazil’s new Nationally Determined Contribution (NDC) “ramps up” climate targets and marks a “change in tone”, advocacy group Climate Observatory (Observatório Do Clima) said the 50% reduction the country submitted to the UN climate secretariat “was still weaker than its 43% commitment using the pre-Bolsonaro baseline, meaning Brazil had not in reality increased its ambition,” reports Reuters.

“Whoever listens to the government’s presentations should question them… because they are doing the opposite of what they say,” Julia Neiva, head of environmental programs at Conectas Direitos Humanos, told Reuters before the summit.

Bolsonaro’s presidency is already marred by a spate of environmentally degrading actions. Since he took office, a land area “the size of Belgium” has been cleared in the Amazon rainforest. “Brazil was likely the only G20 country to increase its carbon emissions in the pandemic year of 2020,” writes Observatório Do Clima, adding that the current government’s racist policies affecting Indigenous communities have made Bolsonaro the only president in Brazil’s history to be denounced at the International Criminal Court.

Still, the new pledge is receiving praise from members of the international community, including U.S. Special Presidential Envoy for Climate John Kerry, who tweeted, “we welcome Brazil’s new commitments to end illegal deforestation by 2028, achieve a significant 50% GHG reduction by 2030 and achieve net-zero by 2050. This adds crucial momentum to the global movement to combat the #ClimateCrisis.”

Brazil now stands to increase its emissions by 400 megatonnes under its adapted NDC. The country’s “stunning exercise of number-crunching” prompted writers of the CAN International’s daily conference newsletter, ECO, to nominate Brazil for a Fossil of the Day award that is bestowed on the most climate-negligent countries.

ECO urges “other countries, for the sake of our planet, not to emulate the Latin American giant—and never, ever, use the maths of the Brazilians to update your own NDCs.”

ECO’s typically snarky tone belies the dire reality that Brazil’s irresponsible climate policies are having devastating consequences. Climate Action Tracker rated Brazil’s 2020 climate plan “highly insufficient” to meet the target of keeping global temperatures within 1.5°C above pre-industrial levels, reports Human Rights Watch. “If all other countries had plans similar to Brazil’s, warming would reach over 4°C by the end of the century.”