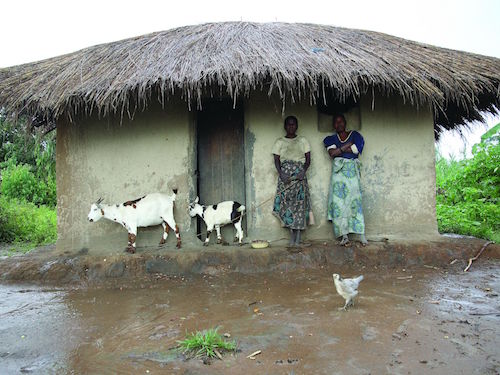 “I dug mud for a week, hoping to catch the whispers of my wife and daughter, a miracle somehow,” says 28-year-old Tonderai Sithole, as he remembers the horror that was March 2019, a month that darkened his entire life. That year, hurricane-level rains and winds from the Indian Ocean descended on the southern African countries of Mozambique, Zimbabwe, and Malawi.

The phenomenon was called Cyclone Idai. Heavy landslides, thunderous rain, and burst rivers gobbled over 1,000 lives. The United Nations called it “one of the deadliest storms on record in the southern hemisphere”. It was the worst climate catastrophe I had ever seen.

Tonderai is not alone. When the headlines of climate-induced weather disasters pass, be they in Louisiana, India, or here, in Zimbabwe, what remains—and is often forgotten—is the physical and mental damage to survivors. Two years on, the cameras, headlines, and aid agencies have gone, but in my eastern Zimbabwe village, in the district of Chimanimani, our minds are heavy with climate-fear.

My district is now a place where seasonal rains, thunderstorms, or flashes of lightning, (which are supposed to be normal weather events) now put our spirits on edge. “Should we run? Is it coming? Should we climb to the hills?” are rapid questions fired in panic each time there is a zigzag of bright lightning in the sky.

Rain and thunderstorms may be normal in other parts of the world, but in Chimanimani? Not anymore.

In my country, Zimbabwe, climate change is expected to heat up surface temperatures by 3℃ by 2099. Rainfall could decrease by up to 18%. What comes will be more bombastic storms, floods, and biting droughts. We face becoming climate migrants, relocating to parts of the country that might be able to weather the perpetual storm—or go elsewhere altogether.

Yet the awful, damn injustice of it all is: Zimbabwe’s greenhouse gas emissions per year are just 0.85 tonnes per capita. If you compare that to Canada’s 18.58, Australia’s 17.10, or America’s 15.5 tonnes, our emissions are some of the tiniest on earth. Emissions from flashy cars guzzling gas in the streets of New York, Toronto, or Sydney, greenhouse gases are stirring up climate floods thousands of miles away, like here in Zimbabwe.

The psychological fear of yet another annual rain season here stems from the reality that the climate horror of 2019 has not brought closure to the living loved ones of the deceased. My neighbour’s teenage sister was either swept away by floodwaters or buried feet under mud with her schoolbooks. Who knows? Her remains have never been located, like hundreds of other people in Zimbabwe and Mozambique.

“When floodwaters ebbed, limbs, hands, and body parts from Zimbabwe were found floating in rivers downstream in Mozambique, a neighbouring country. It is still a mentally traumatizing climate event,” said Chief Gondai Muyambo, a traditional authority in Chikwidzire, a border district that straddles the two countries of Zimbabwe and Mozambique.

In my village, the mental pain of loss has also given way to the development of psychological hallucinations.

“Folks are cooking dinner at 3 PM, shuttering doors and curtains at 6 PM, and going to sleep. Households say ghosts of the dead are patrolling public footpaths at night. It’s bizarre, we try to calm them down by telling them that it’s probably not real,” said Rugare Woyo, a local faith minister with the Zion Christian Church, one of the most followed Indigenous African church denominations in southern African countries.

The mental health disaster in the aftermath of the climate is worsened by the reality that clinical mental health services in rural Zimbabwe are virtually non-existent. In Zimbabwe, a country of 16 million people, only 12 medical psychiatrists are available, according to a 2018 BBC report. Up to 10% of the population of Zimbabwe are living with mental health conditions and, among the few with access to primary healthc are facilities, the number rises to about 30%. My country, Zimbabwe, has one of the highest suicide rates among countries nearby.

The fear of ghosts of the departed might sound irrational and unscientific, but in the absence of closure from the climate disaster-related deaths and clinical mental health services, the explanations given by herbalists for climate events hold sway in my village. In Chimanimani, the vagaries of the weather and climate change are closely linked with beliefs in supernatural and alert spirits of the dead. For instance, if rain clouds gather, community beliefs demand that one must not wear red clothes in case that attracts lightning.

“[The idea that we shouldn’t] wear red if weather lightning comes up; [or that] ghosts from 2019 climate horror are marching up and down village paths; the screams of children fearing the weather and ghosts—it’s all just untreated trauma from the survivors of 2019,” said Catherine Simango, a sociologist and teacher who also hails from Chimanimani.

The tragic legacy of 2019 remains. Self-medication with the likes of marijuana and other substances is common in survivors. “Society said I must move on. I have mental flashbacks of my two siblings swept off by the muddy rivers in 2019, I don’t want to move on,” Casper Shongwe, 29, who never got to bury his siblings, told gal-dem.

For the likes of Casper, a turn to drug substance abuse is a way to calm a torturous self. “I can’t go through the day without a sniff, a smoke.” He said he feels helpless in the face of his fear and grief.

“I’d love to work or go live elsewhere in another district to perhaps forget this place,” Casper added. “But I have panic attacks that freeze my daily life. I used to be an enthusiastic footballer. Bouncing the ball now means nothing to me.”

Earlier this year during January’s rain season, thousands in my village quickly boarded evacuation buses ahead of anticipated storms. The ensuing rains were calm and did little damage, but the strict, swift obedience to advance weather warnings is a picture of a people who have now internalized fear. That fear, and survivors’ guilt, also play a large part in the shattered lives of those who survived the 2019 storms.

When the rains came in 2019, my neighbourhood was spared because we live in an area with wind-blocking hills. When the floods darkened, we feared our guardian hills would also give in. We felt the force of the weather could smash and shift even rocky hills. They did not, and although we gave thanks for our lives, other emotions reared their heads, too. Guilt wears heavy on those of us who survived, while our neighbours in nearby valleys were lost.

“This is a classic case of untreated trauma in a country with the fewest medical resources to even diagnose trauma,” said sociologist Catherine. “Survivor guilt freezes the lives of those who survive. They can’t pick up the pieces, seek new jobs, homes, or relationships. The living become the walking dead.”

Several things are needed to address the crisis. Trained mental health specialists, drawn from affected communities, would be a start. And for people in wealthier Western countries, it is not enough to donate to food or water relief going to poorer nations hit by climate disasters. Funding community mental health care should be a key part of overseas humanitarian aid and activism.

Climate change-related weather disasters can be an elitist, academic, or diplomatic topic in the UN conference rooms of Geneva. But here, on the ground, in Chimanimani, Zimbabwe, deadly weather cyclones are creating mental health fireballs in their wake.

This story was originally published by gal-dem as part of Covering Climate Now, a global collaboration of news outlets strengthening coverage of the climate story.