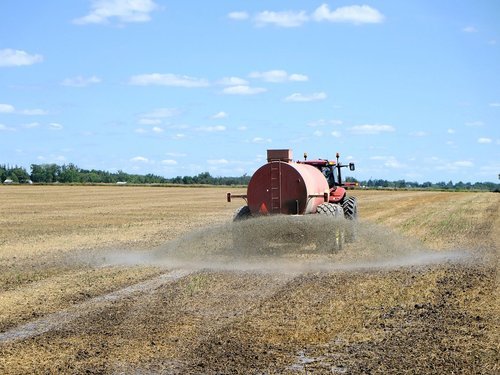 Synthetic fertilizers are major climate polluters accounting for 2.4% of global emissions and 21.5% of annual agricultural emissions, according to a new study that is the first to consider the entire production chain of these industrial chemicals—from manufacturing to soil application.

Researchers calculated that synthetic fertilizer use produced the equivalent of 1,250 million tonnes of CO2 in 2018, more than six times the climate impact of commercial aviation in the same year, writes GRAIN, a non-profit involved in the study alongside scientists from Greenpeace and the Institute for Agriculture and Trade Policy (IATP.)

“Synthetic nitrogen (N) fertilisers have increased by a whopping 800% since the 1960s,” says GRAIN, adding that to successfully address the climate crisis and cut emissions, countries must urgently confront “the hold of the agribusiness lobby on powerful governments.”

“People and the planet must come before corporate profits,” GRAIN says.

Synthetic fertilizers have proliferated in the farming business as a direct result of corporate and political interests promoting the Green Revolution agriculture model. Government programs and subsidies compelled farmers to rely on heavy fertilizer applications to raise crop yields, GRAIN says. The Green Revolution model also created incentives for producers to decouple crop and livestock agriculture, in effect breaking the traditional manure-based nutrient cycle and leading to increased fertilizer use.

The Green Revolution has long been lauded for its promise to cheaply feed the growing human population. But farming in this way also caused severe environmental and social problems. The Green Revolution also “distracted from other approaches that could have increased food production without generating massive consumption of chemical fertilizers.”

Now, in spite of the well-documented repercussions of excessive fertilizer use, corporations are striving to sustain business as usual by claiming that excessive nitrogen application can be corrected by “precision” or “climate-smart” agriculture. Current research contradicts these claims, finding “no evidence that programs to increase efficiency have had any significant impact,” GRAIN says.

The new study’s findings suggest that “industrial farming systems that depend on synthetic [nitrogen] fertilizers and other chemical inputs must be replaced with agroecological farming systems” to avoid the looming climate crisis, says GRAIN. Alternative methods include supporting farmer-based seed and knowledge systems, building soil fertility, and phasing out industrial livestock production.

But while we have the technological and economic capacity to take these steps, the agribusiness and fertilizer lobbies stand in the way by “peddling a false notion that emissions can be sufficiently reduced through a more precise application of fertilizers, without any major changes to the industrial model of agriculture and the structure of the global food system,” says GRAIN. “This is simply not true, and a dangerous distraction from the industry’s ongoing efforts to ramp up fertilizer use, especially now in Africa”

As the “father of the Green Revolution,” Norman Borlaug is credited with saving millions of people from starvation by breeding fertilizer-dependent, high-yielding wheat varieties. His visionary work aimed to lift the global poor out of hunger. It would be unfortunate to taint his legacy now by allowing business interests to drive a climate crisis that will cause crop failures and threaten food security.

Renewables Set to Outcompete Fossils, But Not Without Challenges