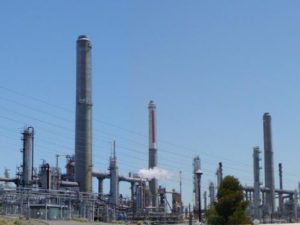 Royal Dutch Shell has pledged to halve its production and distribution (Scope 1 and 2) emissions by 2030, still a far cry from the 45% across-the-board cut (including Scope 3) demanded by a Dutch court in May.

Having purposely been given no formal role by COP 26 organizers in Glasgow, and threatened by an activist shareholder push to break the company up into multiple entities to better weather the energy transition, Shell has pledged to cut its own emissions by 50% from 2016 levels by 2030, reports the Institute for Energy Economics & Financial Analysis (IEEFA).

The pledge comes as the British-Dutch colossal fossil “seeks to navigate competing demands from shareholders and other groups, with some pushing the company to stick with the oil business it knows, to focus on payouts and shrink over time, and others wanting to see greater investment in low-carbon energy.”

The pledge does show a degree of toughness, in that the promised reductions will be absolute, rather than based on carbon intensity, writes Reuters, even though Scope 3 emissions—comprising 90% of the company’s total emissions, according to the Guardian—will not be included. Silence over those downstream emissions is all the more notable given that the company was ordered by a Dutch court in May to cut them 45% by 2030.

Shell announced the emission reductions plan just two days after a report showed its carbon pollution on track to increase by 4% by 2030.

Reporting on the shareholder schism led by New-York based hedge fund Third Point, Reuters says Shell’s executive hit back hard, saying the argument to separate the company’s legacy oil business from its newer forays into liquefied natural gas (LNG) and renewables, in order to “better retain and attract investors,” would ultimately weaken Shell as it works to reconceive its place in the energy transition.

While she acknowledged that the financial case for hiving off legacy projects might seem “really interesting,” Shell Executive VP for Finance Jessica Uhl warned of broader long-term consequences. Shell’s “ability to integrate and bring these different pieces of the puzzle together will be how we uniquely make a difference in the energy transition,” she said.

CEO Ben van Beurden “told reporters that Shell’s strategy is coherent and well understood by a majority of its shareholders,” Reuters adds.