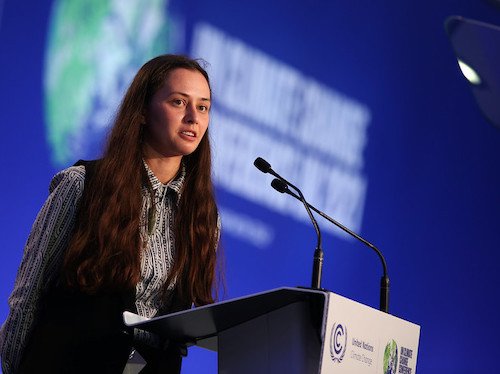 Sunday’s opening statements to COP 26 concluded with a powerful speech by Māori climate activist India Logan-Riley, who emphasized that Indigenous knowledge and culture have stood resilient in the face of colonizing forces and pointed to the urgent need for Indigenous communities to be empowered to lead global climate solutions.

“In the face of mediocre leadership, Indigenous people shine through,” Logan-Riley said. “This is all to say that climate change is the final outcome of a colonial project. In our response we must be decolonial, rooted in justice and care for communities like mine who have borne the burden of the Global North’s greed for far too long.”

“I cannot put it more simply than we know what we are doing and if you aren’t willing to back us, or let us lead, then you are complicit in the death and destruction that is happening across the globe,” reports Climate Citizen, quoting Logan-Riley’s speech.

Logan-Riley began with an introduction in Māori, before outlining their own experiences in Aotearoa (the Māori name for New Zealand that predates the island’s British colonization) against the backdrop of global climate catastrophes.

While in hospital visiting their younger brother as fires engulfed Australia, Logan-Riley recalled overhearing doctors say they were seeing more patients with breathing issues from the smoke drifting across the ocean.

“At that moment our health was bound to the struggle in the land and people in another country,” they said. “With the impacts of climate change our fates are intertwined, as are the historic forces that brought us together today.”

Logan-Riley recalled how Aotearoa’s history led to this moment, beginning 252 years ago when the island was invaded by the “the ancestry of this [U.K.] Presidency.” British documents and policy—like the Doctrine of Discovery—ushered in “an age of violence and destruction” for their people and their land.

“Land in my region was stolen by the British Crown in order to extract oil and suck the land of all its nutrients while seeking to displace my people and end our practices,” they said. “The first time I personally experienced these violent processes was at 10 years old when the local council attempted to steal my community’s land for the construction of a highway. Then after that, the New Zealand government stole the foreshore and seabed and offered it up for deep sea oil drilling the following year.”

These “historic forces” led Logan-Riley to their work in advocacy at the UN where, for years, they have shared the experiences of their people, pointing to the threats of wildfires, sea level rise, diminishing biodiversity, and the toll these environmental catastrophes have wrought. Logan-Riley noted that negotiations began the year they were born, so they have grown up with climate threats looming, “all while the colonial north governments and corporations fudge with the future.”

Logan-Riley’s speech ended on a hopeful note, pointing out that our current circumstance is a result of human behaviour, “so it is also hands and hearts and minds that can remake it.” Thus far, it has been Indigenous and front-line communities leading the shift by opposing fossil fuel expansion— Logan-Riley noted that U.S. and Canadian Indigenous resistance alone has stopped or delayed 1.6 billion tonnes of greenhouse gas emissions per year.

But the rest of the world needs to change, too. The Human Rights Framework needs to be “entrenched in the Paris Rulebook,” global finance needs to be redirected to support a just transition, and “richer countries have to commit to steep emissions reductions this decade rather than palming off responsibility through carbon markets.”

And finally, concluded Logan-Riley, “land back. Oceans back. This is all part of following Indigenous leadership. This is what keeping warming below 1.5° looks like. This is an invitation to you. This COP, learn our histories, listen to our stories, honour our knowledge, and get in line or get out of the way.”