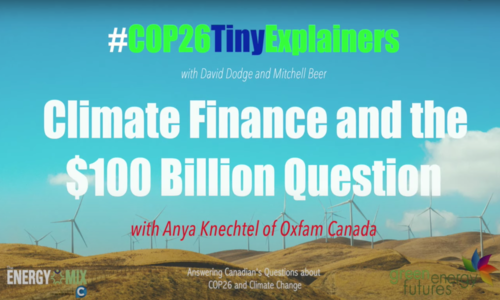 Today’s question: We’ve seen some big numbers thrown around on climate finance: $100 billion per year that rich countries promised the developing world, and a $75 billion gap between the promise and the delivery. What’s going on, and why is climate finance so important at COP26?

Making good on wealthy countries’ still-unkept promise to direct US$100 billion per year to international climate finance is one of the top issues at this year’s United Nations climate conference, said Anya Knechtel, climate policy specialist at Oxfam Canada.

The promise dates back to 2009. The deadline was 2020. And last week, after a flurry of negotiations among the world’s richest countries, a progress report said the target won’t be met until 2023—if then.

After one of the hottest years on record, with more than 98 million people affected by climate disasters that produced $171 billion in losses, no country can escape the human and economic costs of the climate emergency. But developing countries “have far less in terms of resources, in terms of technical capacity to be dealing with these issues,” Knechtel told The Energy Mix, in the first of a series of #COP26TinyExplainers interviews.

“We can look at the wildfires that were raging through Western Canada this past year, at the extraordinary loss of life due to heat-related deaths and the tragic destruction of Lytton. We then turn and look at what’s going on in developing countries and think of the even greater struggles and hardship they’re having,” she said.

“Those countries that are least able and have least responsibility in terms of the climate crisis that we’re now experiencing, they’re the ones that are being hit the hardest. And if we look down deeper into that, we see that even within developing countries, not everyone is being affected equally, particularly vulnerable populations. We look at Indigenous communities, women living in poverty. Many rural communities are feeling these impacts even more. You look at gender disparities, which limit women’s ability to recover or gain access to their homelands or their homes once they’ve been displaced by climate disasters.”

All of those impacts have been compounded by the COVID-19 pandemic, and by armed conflicts going on in different parts of the world.

Rich countries’ commitment of $100 billion per year was supposed to help solve those intersecting problems, delivering funds to help the world’s most vulnerable deal with climate impacts, drive down their greenhouse gas emissions, and adopt green technologies that will prevent future emissions as their economies grow. But those dollars are falling short, and Knechtel said there’s also an issue with the way they’ve been organized. Climate adaptation measures are receiving far less than their fair share of the total, and far too much of the financing—70%—is being offered in the form of repayable loans, rather than outright grants.

“We’re just seeing lost opportunities to help people address this crisis to save lives, quite frankly, when we look at the impacts that climate change is having around the world,” she said. “That’s the tragedy of the failure of wealthy countries to deliver on their commitments.”

One important goal for international climate finance is to help developing countries boost their own capacity to develop, fund, and manage carbon reduction and climate adaptation projects, in areas ranging from green energy to flood control to agroforestry. We asked Knechtel whether those activities make the $100 billion per year a fabulous investment for rich countries, helping to prevent future emissions that countries everywhere would otherwise have to cope with in a warming world.

“It’s a critical investment, and it’s part of a larger conversation about ending the funding of new fossil fuel projects, ending subsidies to existing fossil fuel projects and redirecting that financing to sustainable energy, renewable energy projects, and this transition to a green economy,” she said. “We have to look at how accessible the financing is, and we need to actually target local communities to be sure the finance flows to them and they’re able to lead on projects” like distributed energy systems.