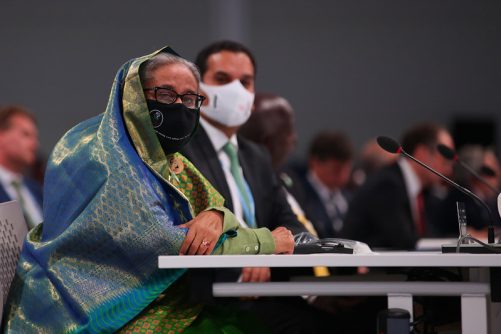 As COP 26 gets under way in Glasgow and public health officials worry about a COVID-19 super-spreader event in the making, delegates from the developing world— many of whom are under-vaccinated or have had no vaccine access at all—see their attendance as a “matter of life and death” for the countries they represent.

Last week, Linda Bauld, chair of public health at the University of Edinburgh’s Usher Institute and chief social policy advisor to the Scottish government, told the BBC that COVID infection rates in Glasgow are currently stable, with the reproduction (R) number hovering just below 1.0 (meaning each infected person infects an average of one other individual). But she warned that such stability is extremely fragile: “it could go above 1.0 again, and that’s a situation we don’t want to be in.”

And U.K. infection rates as recently as a week ago were “unacceptable” and “astonishingly high” compared to “most other west European countries,” Peter Openshaw, a member of the government’s New and Emerging Respiratory Virus Threats Advisory Group, told The Independent a week ago.

“The daily average of confirmed new cases [in the U.K.] has jumped more than 50% since mid-September,” The Associated Press reported.

Despite the troubling numbers, Downing Street maintains there is no plan to adopt measures like mandatory face masks, working from home, or vaccine passports.

Back in Glasgow, while Bauld spoke reassuringly about safety protocols at the COP 26 venue—where about 30,000 registered participants will scramble for the 10,000 spaces available onsite—she voiced concern about the estimated 100,000 people projected to be in attendance at protests and other activist events throughout the climate summit. Noting that many are from out of town and being billeted in private homes, she described the public health impacts of such integration and mixing as “an unknown.”

Local news reports have also pointed to the 5,000 COP staff who will be housed in two rented cruise ships now moored on the River Clyde for the duration of the event.

Bauld said community transmission impacts will only become apparent some 10 to 14 days after the close of the summit.

At COP 26, masks, social distancing, daily testing, and cleaning regimes are among the measures being taken to keep delegates and support staff safe. The Johnson government claims there has been a tremendous effort to create a “comprehensive set of COVID-mitigation measures” which have made COP 26 “inclusive, accessible, and safe,” AP writes.

However, claims of inclusivity have been refuted by those who say summit organizers did not do enough to prevent COVID-19 fears from being a barrier to attendance.

Most critical is the failure to ensure a timely rollout of vaccines that were promised to all delegates who needed them, AP says. That epic failure, occurring in the midst of stockpiled vaccine supplies in wealthy nations, including Britain, highlights “broader issues of vaccine inequity.”

In a mid-September op ed for The Guardian, Power Shift Africa Director Mohamed Adow wrote that, “as one of the millions of unvaccinated Africans, the thought of traveling to Scotland, where cases recently spiked, is a scary one.” But “it didn’t need to be this way,” he added, pointing to wealthy countries’ practice of hoarding supplies and battening down the hatches on intellectual property rights.

Adow was one of many activists who urged COP 26 organizers in early September to postpone the summit, for both public health and socioeconomic concerns, to ensure that those who most needed to be physically present—delegates from the Global South where the climate crisis is having the most devastating impact—could attend.

Scotland’s health minister, Humza Yousaf, told the BBC that while “there is no public health expert in the world who would say there is no risk in the midst of a global pandemic to have tens of thousands of people descending [on Glasgow],” the benefits outweighed the risks.

“We will do everything we possibly can to make the event safe, because we recognize the climate emergency itself is the biggest public health emergency and crisis that we face globally,” Yousaf said.

Gurch Randhawa, a professor of diversity and public health at the University of Bedfordshire, told AP the summit could also prove a make-or-break moment in building public confidence around pandemic protection measures. But if those measures fail, the “whole global audience watching will potentially lose confidence in public protection measures that are in place around most of the world.”

Speaking with AP a few days before the COP began, and still anxiously awaiting his visa to travel to Scotland, 29-year-old Fijian climate activist Lavetanalagi Seru admitted the rising incidence of COVID cases in the U.K. frightened him, even though he himself is fully vaccinated.

However, he remained determined to attend. “For the Pacific, this is a matter of life and death,” he said. “That’s why we are fighting so hard.″