#TBT: Paris Climate Update: Square Brackets Could Decide the Fate of the World 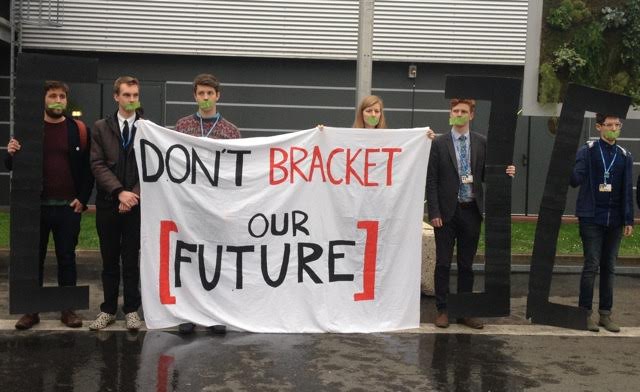 PARIS, December 8, 2015—The United Nations climate summit has just a few more days to run, and the bare-knuckle round has begun.

The inspiring opening speeches (and Canada’s was very inspiring) are done. Professional diplomats from 195 countries have done their best to narrow the range of options and reduce the length of the negotiating text before handing it off to ministers.

Now, countries are weighing up their bottom lines, jockeying for support, making trade-offs, and building alliances, all of them looking out for their own national interests in an agreement that is supposed to be about everyone in the world.

That puts us in a territory where the bloodless language of international diplomacy becomes nothing less than surreal.

We hear about the “red lines” the national negotiators won’t cross, the “landing zones” where compromise or accommodation might be possible. (We seem to have forgotten that global climate systems don’t negotiate, and haven’t much capacity to care what compromises we reach.)

It’s a territory where nothing is necessarily as it seems, where even a progressive, magnanimous, generous announcement by one national government might actually be a hook for dragging some even more important concession out of others.

Where about 110 countries (at last count) can earn points for endorsing the aspirational goal of a 1.5ºC limit on average global warming, but find it far harder to support the tools and mechanisms that will make the goal realistic.

Where a triple-hash symbol (###), indicating a number that has yet to be filled in in the text, is referred to as a “smiley-face” by negotiators who are so exhausted, adrenalized, and absorbed in the process that they can’t seem to hear the utter incongruity of the term.

Where square-bracketed text is used to show competing or opposing options for the final agreement, and the right or wrong option could [deliver the agreement we need] [kill 100 million people] and [usher in a fairly robust regime of international climate cooperation] [abandon whole regions of the world—including parts of Canada, which is warming at twice the average global rate—as sacrifice zones].

Some of the issues we’ve been following:

• Pressure for an agreement to begin reviewing countries’ carbon reduction commitments in 2018, before they actually take effect in 2020, since we already know that the aggregate agreements leading into this summit won’t bring us anywhere near a 1.5º or even a 2.0º outcome;

• A process for continually “ratcheting up” the carbon reductions in national commitments at five-year intervals;

• A huge fight—far tougher than it should have to be—for a provision that grounds the Paris agreement in a commitment to human rights, Indigenous rights, gender equity, and a just transition for people whose jobs will be affected in a shift away from fossil fuels;

• The urgent need for developed countries to make good on their promise to adequately fund climate action in developing countries;

• A big, distracting battle over a provision that would allow another four years of discussion on accounting for the loss and damage vulnerable countries will face due to climatic changes that are already inevitable. The United States and some of its allies are anxious to avoid any formal liability for compensation for loss and damage, but developing countries let that language drop months ago. Now, people just want to keep the conversation going, but the U.S. is holding out for text that permanently blocks any future consideration of compensation or liability, forever and for all time. (I’m told that position is pretty deeply at odds with the principles of fair negotiating.)

None of this changes the things we know to be true out in the real world, where square brackets are just a neutral editing device and smiley faces belong on emoticons or happy people.

We know we need a depth and seriousness of global climate action that leaves no one behind. That means 1.5º as the absolute, utter limit on average global warming, and a just transition for the fossil fuel work force.

We know that about 80% of known fossil fuel reserves have to stay in the ground, and that investors face trillions in financial losses if they miss the signal and wait too long to divest.

We know that the two remaining pipelines on the Canadian fossil industry’s wish list must be subject to appropriate environmental review, not the degraded and degrading sham brought in by a past government. And we know many First Nations and other communities will still have a pipeline fight on their hands in the new year.

We know that renewable energy costs are plummeting, energy storage is rapidly becoming a mainstream option, and smart grid technology is ready for prime time.

We know we can completely decarbonize our energy systems by 2050.

We know that soil can sequester vastly more carbon than industrial carbon capture and storage schemes, at less cost, and through processes that come much closer to mimicking and strengthening natural processes rather than diverting or destroying them. (And I know I need to learn a lot more about soil sequestration when I get home. Light holiday reading, anyone?)

However strong or weak the Paris agreement turns out to be, we’ll keep on doing what we do, pushing for the changes and decisions we need. But in the end, policy matters, and international policy can either strongly support or severely inhibit rapid action on climate change.

In a few days, we’ll have a better idea how much chance there is that the smiley-faces will still be smiling by mid-century.

Or whether the wrong choice of square brackets, decided on by exhausted, fed-up negotiators, will leave 100 million of those real-world smiley-faces dead.