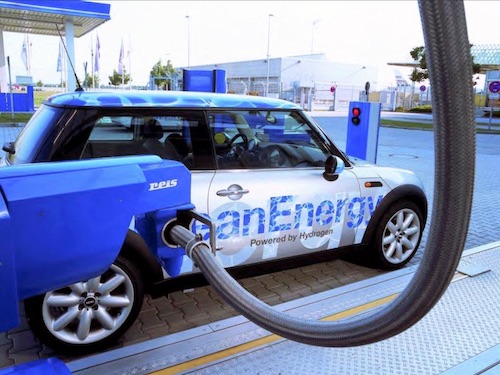 Record-high natural gas prices in Europe are having an unforeseen impact on one of the cornerstones of the shift off carbon: they’re making “green” hydrogen less expensive than the “blue” and “grey” varieties derived from natural gas, at least for now, far faster than anyone expected.

A record high carbon price would also making it a worthwhile financial proposition for companies to capture and store the methane generated as a byproduct of fossil-based hydrogen production, Recharge News reports—except that there is no “blue” hydrogen now in production on the continent.

In recent years, analysts have acknowledged that fossil-based hydrogen is currently cheaper than the “green” product derived from solar- and wind-generated electricity, but have generally projected that green hydrogen will become the most affordable option around 2030. This fall’s sudden price flip could be a wake-up call for financiers who plan their investments years or decades in advance, with no way to foresee sudden shifts in prices or other market conditions that could turn a promising project into a stranded asset.

Recharge News has detailed pricing that shows green hydrogen manufactured in mid-October coming in at €4.18 per kilogram, compared to €6.55 for grey (after factoring in a record-high €60-per-tonne carbon price) and €6.21 for blue.

“Such calculations depend on the assumptions used, including the cost of electricity and natural gas, capacity factors at renewables projects, capital and operating expenditure (capex and opex), interest rates, electrolyzer efficiency, and carbon capture rate,” the UK-based newsletter states. And “of course, if the price of fossil gas falls, this changes everything.”

“Grey” hydrogen refers to product derived from gas who simply allow the resulting emissions to stream into the atmosphere; with “blue” hydrogen, the incur the (often prohibitive) cost of capturing and storing the carbon.