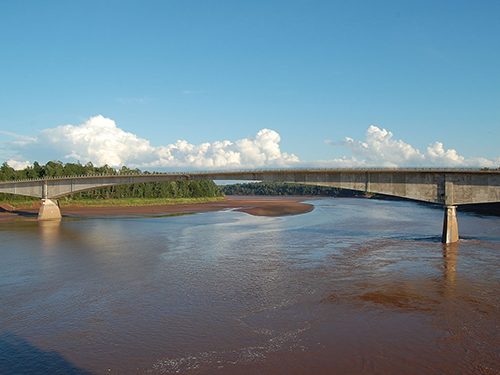 Seven years after local Mi’kmaq Elders first moved to block a project that would have left salt caverns along Nova Scotia’s Shubenacadie River full of natural gas, and the river itself dangerously saline, the company in charge of the project has pulled the plug.

First presented to Nova Scotia’s Ministry of the Environment in 2007, the Alton Gas project would have used water from the Shubenacadie River to flush salt deposits from underground caves, thereby making room for up to 10 billion cubic feet of natural gas. The company claimed that stockpiling natural gas was necessary to protect customers against price shocks.

A Canadian Press report from 2019 explained the project would have involved pumping the brine solution left over from the flushing process into the Shubenacadie “twice a day at high tide, over a two- to three-year period.” The 73-kilometre river bisects Nova Scotia, flowing into the Bay of Fundy.

A 2016 report produced by Environment Canada’s Atlantic Laboratory for Environmental Testing found that even after dilution, releasing the brine solution into the river could increase salinity to “acutely toxic” levels for some species of native fish, including the three-spined stickleback.

By 2019, Alton had successfully created two large caverns about one kilometre below surface. CP adds that, at that time, the company had indicated it might need “as many as 15 caverns, which would be linked to the nearby Maritimes and Northeast natural gas pipeline, about 60 kilometres north of Halifax.”

Speaking with CP three years ago, Dorene Bernard, member of the Sipekne’katik First Nation, social worker, and protector of the Shubenacadie, described the river as a “major highway, a major artery for our people.” Noting that its shores are ancestral burial grounds for the Mi’kmaq, she added that the river “has a very significant historical, spiritual and cultural relevance to who we are.”

Determined to stop the Alton project and protect the river, Bernard and other community members began organizing protests in 2014.

Over the years, protestors built a permanent year-round camp at the worksite. In April 2019, after being arrested by RCMP at the protest camp, three Mi’kmaw grandmothers filed a land title claim against the project.

Alton’s responses to efforts to uphold Indigenous rights and protect ecosystems included seeking a court injunction in February 2019 to shut down the protest site on the grounds of public safety. Describing the protestors as “trespassers,” Alton claimed they were preventing workers’ access to the worksite to complete urgent electrical repairs.

Speaking with CP at the time, Bernard rejected Alton’s version of events. “We didn’t block anybody. They walked in and walked out,” she said. “There was no altercation. There were no threats. If anybody was threatening, it was them.”

Now, though the project is in the process of being decommissioned, CBC says there remains legal and political controversy from a 2016 court hearing related to the Sipekne’katik opposition to the project. During that hearing, now former Justice Department lawyer Alex Cameron argued that “the province did not have a duty to consult because that requirement only applied to ‘unconquered people,’ which he implied was not the case with Mi’kmaq communities.”

His comments led to public outcry and a formal apology from then-premier Stephen MacNeil to a group of Mi’kmaq chiefs, as well as a defamation suit brought by Cameron against the province, MacNeil, and former justice minister Diana Whalen.

Celebrating the end of the Alton project, Sipekne’katik First Nation leader Cheryl Maloney said she sees a victory for all Nova Scotians, both those living today and those still generations from being born.