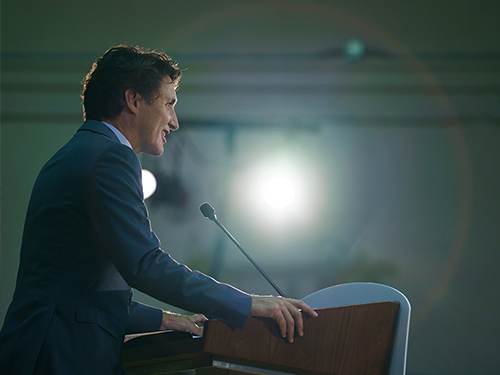 When Trudeau issued that platform promise in late August, experts said it represented the end of oil and gas expansion in Canada. After the election, Environment Minister Jonathan Wilkinson said the government believes it can implement the cap with existing legislative authority, NDP MP and spokesperson Laurel Collins gave the idea a thumbs-up, and Canadians across the country weighed in in an Abacus Data poll that showed strong support for an emissions cap and swift action on the climate crisis.

Cue the doomsaying from the industry that currently accounts for 26% of the country’s emissions.

“That is light speed for an oil sands company. That’s tomorrow,” agreed Kevin Birn, chief analyst of Canadian oil markets at IHS Markit. “They’re a very hard ship to turn because they have so much [sic] emissions.”

Reuters says Suncor is the only major Canadian fossil with a plan on paper to cut emissions by 2030, and its strategy depends on industrial carbon capture technologies that are speculative at best. That didn’t stop another fossil executive, Cenovus Energy CEO Alex Pourbaix, from calling on taxpayers to cover three-quarters of a C$75-billion price tag to try to make carbon capture a reality by mid-century.

The Energy Mix readers were quick to come back with their own ideas on how much decarbonization a $52.5-billion public investment could buy.

But while Trudeau previously promised to cut emissions 40 to 45% by 2030, and “Canada’s crude industry generates some of the highest emissions per barrel worldwide,” Reuters says the PM had never explicitly singled out fossils to deliver their share of the reductions.

“We had obviously been having conversations with the feds long before the budget came out last spring, long before the (election) campaign,” Hall Findlay told the news agency. “None of those discussions have mentioned 2025. At Suncor, we’re laser-focused on 2030.”

Cenovus and Canadian Natural Resources Ltd. had planned to publish emissions targets by the end of this year, Reuters adds, but company spokespeople declined to comment on what they could get done by 2025.

Steve MacDonald, CEO of Emissions Reduction Alberta, said a 2025 timeline would be “ambitious for sure”, adding that it would be more realistic to expect sharp emission cuts a decade later. “They’re big, large operations, and they can’t pivot quite as quickly.”

The objections are emerging at a moment when “Canadian producers are expected to report big quarterly profits in coming weeks as oil and gas prices have soared,” Reuters notes. “The companies have prioritized repaying debt and returning cash to investors, but Trudeau wants producers to spend some profits on curbing emissions.”

Reuters cites Yangarra Resources, a small Alberta fossil producing the equivalent of 10,000 barrels of oil per day, as proof that fast, deep emission cuts are possible, using techniques that the bigger operators should be able to scale up. Yangarra has plans to reduce its emissions 47% by the end of 2022 by powering its pumpjacks with electricity rather than natural gas, and replacing older equipment that leaks large volumes of climate-busting methane.

“Cutting carbon in the oil patch is going to be a whole lot easier than anyone thinks,” said CEO Jim Evaskevich. “All of the changes we are implementing make incredible economic sense.”

Canada Unlikely to Join Beyond Oil and Gas Alliance