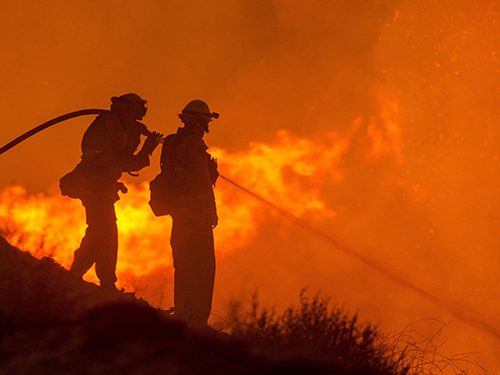 Some of the firefighters risking danger to save homes and lives during wildfires in the United States are members of incarcerated crews working for negligible pay—yet, says one former inmate, the smoke and danger are far better than the conditions inside the California prison system.

“Yes, the decision to take part is largely made under duress, given the alternative. Yes, incarcerated firefighters are paid pennies for an invaluable task. And yes, it is difficult though not impossible for participants to become firefighters after leaving prison,” writes Matthew Hahn in The Washington Post. “Despite this, fire camps remain the most humane places to do time in the California prison system.”

Each year, the wildfire season sparks outcries condemning the “fire camp” program as chain-gang labour, pointing to low wages and exploitation. But Hahn, who volunteered for the program while incarcerated, says he didn’t know a single inmate who didn’t want to be in fire camp as a “reprieve” from the confines of their cells and the violence of California prison life.

“California prisons have, on average, three times the murder rate of the country overall and twice the rate of all American prisons. These figures don’t take into account the sheer number of physical assaults that occur behind prison walls,” he says.

“Prison feels like a dangerous place because it is. Whether it’s individual assaults or large-scale riots, the potential for violence is ever-present.”

Compared to prison life, Hahn adds, the fire camps have better meals, opportunities for hobbies, and a general sense of freedom in an environment without walls, fences, or gun towers. And inmates find the opportunity to do meaningful work that is accepted on par with that of other firefighters is satisfying.

Given these upsides, the choice of an inmate to participate in a fire program is a rational one, Hahn says. While he acknowledges the good intentions of those advocating against fire camps, he does not want that conversation to endanger a program that is a lifeline for many inmates.

“If one is genuinely worried about slavery or the choiceless choice of incarcerated firefighters, consider the guy pushing a broom in his cell block making the equivalent of one Top Ramen noodle packet per day, just so he can have the privilege of making a collect call to his mother,” writes Hahn. “Or think of the man scrubbing the streaks out of the guards’ toilets, making seven cents an hour, half of which goes to pay court fees and restitution, just so he can have those couple of hours outside his cage for the day.”