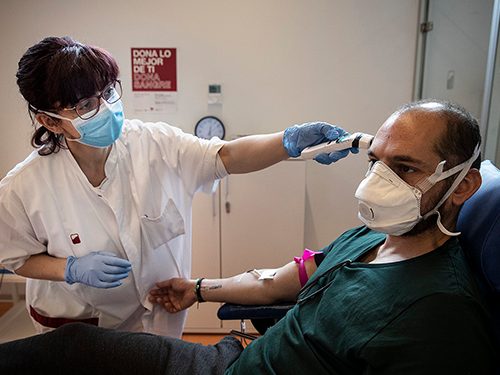 The Lancet Countdown’s sixth annual report on the links between public health and the climate crisis is urging a rapid and concerted “code red” effort to integrate climate mitigation into pandemic recovery plans.

The new report from the world’s most prestigious medical journal represents the “consensus of leading researchers from 43 academic institutions and UN agencies” and tracks 44 indicators. Together, those measures “expose an unabated rise in the health impacts of climate change and the current health consequences of the delayed and inconsistent response of countries around the globe—providing a clear imperative for accelerated action that puts the health of people and planet above all else.”

Subtitled “Code Red for a Healthy Future”, the report finds “deepening inequities in a warming world,” with the elderly, the very young, and the poor suffering most.

One measurement of this reality: “Record temperatures in 2020 resulted in a new high of 3.1 billion more person-days of heat wave exposure among people older than 65 years and 626 million more person-days affecting children younger than one year, compared with the annual average for the 1986–2005 baseline.” (As hundreds of mostly elderly British Columbians discovered this summer, such exposure can be tragically lethal in the absence of air conditioning or the ability to move to cooler green spaces.)

Citing poverty as another guarantor of disproportionate suffering in an overheating world, the report finds that agricultural workers in countries that score low to medium on the UN’s Human Development Index (HDI) have been “among the worst affected by exposure to extreme temperatures, bearing almost half of the 295 billion potential work hours lost due to heat in 2020.”

Those lost hours “could have devastating economic consequences to these already vulnerable workers,” the report authors add, noting that “data in this year’s report shows that the average potential earnings lost in countries in the low HDI group were equivalent to 4 to 8% of the national gross domestic product.”

Further harming underserved populations are the climate threats to food and water security, with drought looming particularly large in East Africa. Yields for corn and soybean (both major staple crops, alongside winter wheat and rice) suffered heat- and drought-related declines of 6% and 5.4%, respectively, in 2020.

The food security of some 3.3 billion people worldwide is also imperilled by warming oceans.

“Average sea surface temperature has increased in the territorial waters of nearly 70% (95 out of 136) of coastal countries analyzed, compared to 2003–2005,” the report authors write. And along with that warming comes an increased threat to marine food security.

Then there is the rise of pathogenic illnesses like malaria, dengue fever, and Zika as air-, water-, food- and vector-borne diseases make inroads in a warmer world. “Although socioeconomic development, public health interventions, and advances in medicine have reduced the global burden of infectious disease transmission, climate change could undermine eradication efforts,” the report warns.

Altogether, as it brings with it all of these “simultaneous and interacting” health risks, the climate crisis “is threatening to reverse years of progress in public health and sustainable development.”

The authors urge nations to rise to the challenge. “In 2020, 104 (63%) of 166 countries did not have a high level of implementation of national health emergency frameworks, leaving them unprepared to respond to pandemics and climate-related health emergencies.” And while 89% of countries with a “very high” HDI reported at least a medium level of implementation, that number fell to 55% for the 33 most vulnerable nations.

Warning that “an inequitable response fails everyone,” the Countdown adds that profoundly inequitable access to the COVID-19 vaccine (only 3.5% of people in low-income countries have received at least one dose) has run in parallel with “similar inequities in the global climate change mitigation response.”

Looking at the reasons for the generally lethargic global effort to decarbonize, the report places some of the blame on fossil fuel subsidies. In 2018, 65 of the 84 countries responsible for roughly 92% of global emissions “had net-negative carbon prices equivalent to an overall subsidizing of fossil fuels,” with the median value of the subsidy clocking in at US$1 billion. Some countries, however, provided net subsidies to the tune of tens of billions of dollars annually.

In a statement, Lancet Countdown Executive Director Anthony Costello urged policy-makers to recognize the crossroads at which the human species now stands. “The recovery from COVID-19 can be a green recovery that puts us on the path of improving human health and reducing inequities, or it can be a business-as-usual recovery that puts us all at risk,” he said.

Lead author Maria Romanello said that while the trillions of dollars being spent on recovery “gives us an opportunity to take a safer, healthier, low-carbon path,” the world has yet to take advantage of that opportunity. Less than 20% of COVID recovery funding is being spent in a way that will reduce greenhouse gas emissions, she warned, and the overall effect of the pandemic will end up doing more harm than good in the fight for human well-being.

“We are recovering from a health crisis in a way that’s putting our health at risk,” she said.