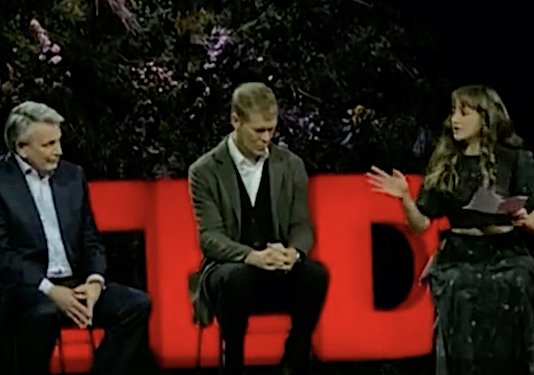 This story has been updated with comments from TED Countdown co-founder Lindsay Levin.

“We will never forget what you have done and what Shell has done,” and “as the climate crisis gets more and more deadly, you will be to blame,” Scottish climate campaigner Lauren MacDonald told Royal Dutch Shell CEO Ben van Beurden Thursday, during a TED Countdown Summit panel in Edinburgh.

In a segment that ran just over two minutes, MacDonald asked van Beurden how he can claim to be serious about climate action when his company is appealing a Dutch court ruling earlier this year, requiring it to cut its greenhouse gas emissions 45% by 2030. When van Beurden tried talking around what she’d signposted as a “yes or no question”, MacDonald walked off the stage and received loud applause from audience members, many of whom had paid US$10,000 to $50,000 for tickets to the four-day event.

After MacDonald cut van Beurden off, “youth activists climbed onto the stage, unfurling banners that read, ‘No future in fossil fuels’,” Gizmodo reports. “The activists walked out of the room as MacDonald removed her mic and stepped off the stage to join them. As they walked out the auditorium doors, they shouted, ‘Don’t just watch us, join us!’”

By the end of the session, a rattled Shell CEO was no doubt horrifying his PR team by accusing demonstrators of “blackwashing” the fossil industry.

MacDonald and van Beurden appeared on a panel with Engine No. 1 hedge fund founder Chris James and former UN climate secretary Christiana Figueres, part of a larger event where panelists were to “share a blueprint for a beautiful net-zero future,” Democracy Now reports. But in this session, MacDonald may have been the only panelist building her blueprint in three dimensions.

“No matter what he says today, remember, Shell has spent millions covering up the warnings from climate scientists, bribing politicians, and even paying soldiers to kill Nigerian activists fighting against them, all whilst rebranding to make it look as though they care and that they have the intention of changing,” she told participants while pointing a finger at van Beurden. “Disproportionately in the Global South, so many people are already dying due to issues related to the climate crisis, such as pollution, extreme heat ,and weather-related disasters.”

“This is not an abstract issue,” MacDonald told the Shell CEO, “and you are directly responsible for those deaths.” She added that she couldn’t understand “what goes on in your mind to sit there and say, ‘I’m trying to do better’ when you’re appealing against being legally [bound] to climate action.”

MacDonald shared the story behind her panel appearance in a direct message exchange with climate essayist Mary Annaïse Heglar, co-publisher of the excellent Hot Take climate blog (if you haven’t already subscribed, find out more about them here).

“A group of activists who were invited to the TED Countdown summit realized that Ben van Beurden, the CEO of Shell, would be speaking at the conference. This caused a storm amongst the Stop Cambo community, as we were outraged that van Beurden was given a platform whilst there was a severe lack of representation of both directly impacted and BIPOC activists,” MacDonald explained. “Also, there were almost no Scottish people invited to the summit, despite it taking place in Edinburgh.”

When the local activists talked to TED organizers, they were “very taken aback by our demand that Shell be removed from the event,” she continued. “However, hearing our concerns about representation, they did give out some extra passes for the conference, and offered for a Scottish activist to speak on the panel with van Beurden.”

Initially, MacDonald told Heglar, she was given two days’ preparation time to deliver a three-minute speech in advance of the session. On Wednesday, she was integrated into the panel, and spent four hours with event staff. “They wanted to cut out a lot of what I wanted to expose,” she said. “For example, they encouraged me not to speak about the Ogoni 9,” the Nigerian activists including writer and human rights campaigner Ken Saro-Wiwa who were killed by their government in the 1990s.

Shell “has faced heavy criticism from activists and local communities over [oil] spills and for the company’s close ties to government security forces” since it began exploiting Nigeria’s oil reserves in the late 1950s, Al Jazeera reported earlier this year.

TED Countdown co-founder Lindsay Levin said the speaker support offered to MacDonald was “optional, not mandatory”, as it is for all speakers. “Our team were generous with their time and expertise, with the sole goal of helping Lauren to feel supported and confident, and to communicate effectively on a platform that may have been less familiar to her,” she told The Energy Mix in a statement. “The conversation was designed so that each participant was given time to both provide context for their work and ask and answer questions of each other. During the event, given Lauren’s decision to leave the stage early, she cut short how much she was able to say. We and the audience would have liked to hear more fully from Lauren.”

While MacDonald told Heglar she faced second-guessing and condescension after breaking into tears onstage, Heglar said that was the most affecting moment in the video. “Looking straight at the CEO of one of the biggest oil companies in the world and exposing him for the atrocities he is responsible for was an unbelievable situation to be in. I fully felt the intensity of that moment and the immense opportunity to speak up for people who have suffered at the hands of Shell’s evil practices,” MacDonald wrote.

“A couple of older women attending the conference approached me afterwards to say that I should never get emotional in front of a powerful man, but I disagree,” she added. “I was terrified about the potential exposure, and not doing the situation justice, but I was not scared of showing my emotions. I never want to censor myself for the benefit of looking powerful in the eyes of someone like him. I’m sure my authenticity just made him more uncomfortable.”

Later, MacDonald joined a rally outside the summit opposing the UK government’s plan to approve the new Cambo oilfield off the Shetland Islands—while simultaneously trying to lead high-stakes negotiations at this year’s United Nations climate conference, COP 26, in Glasgow.

“My family is from the Niger Delta, and I know the harm Shell has caused and continues to cause by pushing us closer and closer to climate devastation,” climate activist Daze Aghaji told the rally. “This action is the youth saying enough is enough, asking the hard questions and demanding answers.”

She added that “we need Shell to commit to stopping the future harm caused by projects like the Cambo oilfield, but also addressing the past harm like the murder of Indigenous activists.”