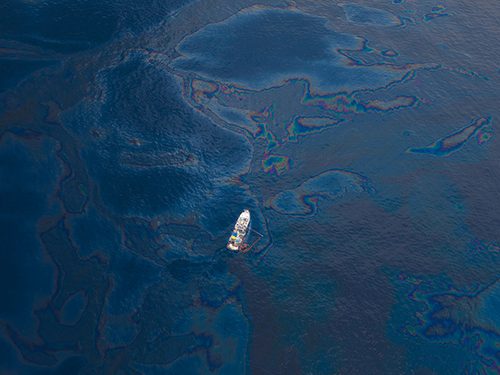 Pipeline operator Beta Offshore faced tough questions about the hours it took to report a major spill, U.S. Coast Guard investigators boarded a massive container ship suspected of triggering the incident, and California lawmakers threatened an offshore drilling ban as the state continued its cleanup from a 475,000-litre crude oil spill off its southern coast.

The 305-metre Rotterdam Express, a German-flagged vessel operated by Hamburg-based shipping company Hapag-Lloyd, was “only one lead” in the investigation into the spill, The Associated Press reported Wednesday, citing U.S. officials.

The ship “appeared to make a series of unusual movements while anchored in the closest spot to where the break in the pipeline happened, according to data collected by a marine navigation service,” the news agency wrote. “But in an email Thursday, MarineTraffic spokesperson Fotini Tseroni said the movements indicated for the Rotterdam Express apparently were erroneous and may have resulted from errors involving the ship’s GPS system. The company said it was removing the jumps in position to show the ship stayed within its anchorage.”

The company said it was “fully cooperating” with the investigation, and asserted that its ship played no role in the spill.

Though the CEO of Beta Offshore’s parent company, Amplify Energy, initially said the offshore pipeline had been “meticulously maintained”, the operator still faced scrutiny in the wake of the devastating spill. Beta “didn’t report the leak to the feds for hours, even though EPA rules require an immediate disclosure,” Politico Morning Energy writes. “The delay is raising questions, especially since the pipeline should have been equipped with highly sensitive technology that would have instantly detected the leak—especially if the pipe had been struck by a ship’s anchor as Beta Offshore posits.”

The incident has Democrats on Capitol Hill in Washington calling for a ban on offshore oil and gas drilling in federal waters in the Pacific Ocean, with two committee hearings coming up to dive into offshore drilling legislation and the state of abandoned offshore fossil infrastructure, Politico ME says.

“The majority of Californians oppose offshore drilling, and with aging infrastructure, we’re likely to see more oil spills in the future if we don’t make a change now,” California Democrats Ted Lieu and Julia Brownley said in a statement. “It’s time to put an end to offshore drilling in California. Our environment and our communities depend on it.”

The federal politicians are channelling anger that extends well beyond the halls of the U.S. Congress.

“It’s alarming that even with so-called best leak detection technology, a disaster of this magnitude can devastate the local economy and environment,” Oceana Campaign Director Diane Hoskins told Politico. “When the oil and gas industry describes their technology, they are selling a sense of safety they cannot back up. Anywhere else, if you called this your best, you’d be fired.”

California Governor Gavin Newsom dug into the mechanics of shutting down the industry. He “vowed Tuesday that California would block any new efforts to drill off its coast in state or federal waters but acknowledged that getting rid of drilling operations that are already in place is much harder,” the Washington Post writes.

“The deeper question is how do you transition out and still respect the work force,” Newsom told media in Huntington Beach, one of the coastal communities affected by the spill. “We have to map that out with more clarity and more nuance, not just platitudes.”

“Indeed, the spill from Amplify Energy’s oil platform underscored the limits to what elected officials can do to halt offshore drilling,” the Post says. “Although no new drilling leases have been issued in decades off the California coast, around two dozen sites remain operational—and they can keep operating in perpetuity even if no new leases are approved, according to environmental groups.”

Reuters says the 23 drilling rigs still operating off California produce 12,000 barrels of oil per day, far below its past daily output of 200,000 barrels, or the million barrels per day extracted from the U.S. Gulf Coast.

But “you’re not going to completely eliminate the threat of leaks in pipelines around existing operations until existing operations cease,” Damon Nagami, senior attorney and director of the Southern California ecosystems project at the Natural Resources Defense Council, told the Post. “So that’s our long-term goal. How to get there is a different question.”

Grist says cargo ship congestion off Orange County may be one of the factors behind the spill. News reports in recent weeks have warned of weeks-long backups of cargo ships approaching the ports at Long Beach and Los Angeles, the world’s ninth-busiest marine shipping complex.

“Experts say the traffic jam along the Southern California coast and at other major ports around the country may be more than a pandemic-era blip,” Grist writes. “U.S. retail imports and e-commerce sales are expected to soar in coming years, and emissions from vessels, heavy-duty trucks, trains, and port equipment are expected to climb in tandem,” as long as their engines continue burning fossil fuels.

“This should not necessarily be considered as a temporary issue,” said Sam Pournazeri, head of the mobile source analysis branch at the California Air Resources Board. “We really need to think about cleaning up the ports and going to zero-emissions across the freight sector, wherever feasible, to avoid these kinds of air quality issues.”

Even if the shipping backlog didn’t contribute to this week’s spill, Grist says air pollution from the anchored vessels’ secondary diesel engines is harming the primarily Black and Hispanic communities of East Los Angeles, Southeast LA, and Greater Long Beach.

“If you go down to the harbour, you can see the ships going out for several miles, and you can see the emissions coming out of their smokestacks,” said Taylor Thomas, co-executive director of East Yard Communities for Environmental Justice.