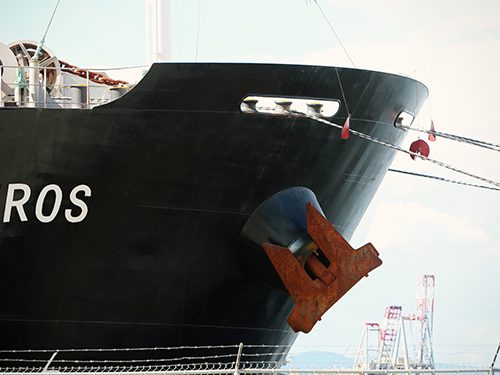 Damage from a ship’s anchor is emerging as a possible cause of an offshore pipeline spill this week that dumped at least 126,000 gallons/475,000 litres of crude oil across an initial area of 13 square miles, threatening wildlife and potentially closing miles of Southern California beaches for weeks.

An official report late Tuesday afternoon said a 1.2-kilometre-long section of the pipeline “was split open and apparently dragged more than 30 metres along the ocean floor, possibly by a ship’s anchor,” The Associated Press reports.

Preliminary and as yet unconfirmed reports “suggested the failure may have been ’caused by an anchor that hooked the pipeline, causing a partial tear’,” AP adds, citing federal transportation investigators. “The break in the line occurred about eight kilometres offshore at a depth of about 30 metres beneath the surface, according to the investigators. Their findings were included in an order from the Department of Transportation blocking the company that operates the pipeline from restarting it without extensive inspections and testing.”

“The pipeline has essentially been pulled like a bow string. And so, at its widest point, it is 105 feet away from where it was,” said Martyn Willsher, CEO of Houston-based Amplify Energy, whose subsidiary Beta Offshore operates the line.

The spill was first reported Friday evening by a “Good Samaritan” who spotted a sheen on the water, U.S. Coast Guard Rear Admiral Brian Penoyer told AP. By Monday, officials were warning of an “environmental catastrophe”, the Washington Post reports. “This oil spill constitutes one of the most devastating situations that our community has dealt with in decades,” said Huntington Beach Mayor Pro Tem Kim Carr, and there will be “a lot more hitting our shores over the next few days.”

At a news conference Sunday, she said authorities were looking at who was responsible and how to hold them accountable.

The Post has the spill originating a few miles off Newport Beach and Huntington Beach at Platform Elly, an offshore oil rig operated by Amplify subsidiary Beta Operating Co. Willsher said the pipeline was “meticulously maintained” and had been “suctioned at both ends” to prevent further leakage.

“Our employees live and work in these communities, and we’re all deeply impacted and concerned about the impact,” he said. “We will do everything in our power to ensure that this is recovered as quickly as possible.”

Earlier Tuesday, Willsher said his company was focusing on “one area of significant interest” after divers had inspected about 2,430 metres of pipe, adding that an anchor strike was “one of the distinct possibilities” behind the spill, AP says.

“We’re looking into if it could have been an anchor from a ship, but that’s in the assessment phase right now,” said Coast Guard Lt.-Cmdr. Jeannie Shaye.

“Orange County District attorney Todd Spitzer has said he has tasked investigators with determining whether he could bring state charges for the spill,” The Hill adds, citing an AP report. “Spitzer also said Amplify divers should not be permitted to be near the pipeline without independent authority from him.”

“If that is not done independently, that is a travesty,” Spitzer told media Monday. “The company should not be responsible for leading its own investigation with respect to the hundreds of millions of dollars of devastation that it did to our environment and our economy.”

With the cleanup continuing and the disaster post-mortem just getting under way, the Washington Post was out with an early inventory of the local impacts. Laguna Beach shut down its beaches Sunday evening, and the state Department of Fish and Wildlife (DFW) closed fisheries along a 25-mile stretch from Huntington Beach to Dana Point. The U.S. Coast Guard deployed floating booms and recovered about 3,150 gallons of crude, “but oil still ‘infiltrated’ and caused damage in a wetlands area called Talbert Marsh, which is home to many bird species,” the Post writes, citing Orange County Supervisor Katrina Foley.

With dead fish and birds beginning to wash up on shore, and one oiled duck receiving veterinary care, “we’re hoping we have minimal impact, but we’re preparing for the worst,” said DFW Lt. Christian Corbo.

“The animals most affected, that we can’t do anything about, are those critters just offshore. Those are going to be seabirds, marine mammals, things of that nature,” added California State University coastal ecotoxicologist Sean Anderson. While some species like dolphins can swim out of harm’s way if they see oil, seabirds and sand crabs are major points of vulnerability.

Birds rely on clean feathers to stay warm, so when they’re splashed by oil, their instinct is to preen it off “as if it’s a piece of dirt,” he told the Post. “Then they ingest the oil and if it’s a little, it might be okay, but it’s usually a pretty toxic exposure, and they die.”

Sand crabs will see the impacts when waves crash on the beach, Anderson added. “Everybody eats those things. Fish eat them, birds eat them. They are really super important for the sandy beach ecosystem,” even if the total volume of oil is relatively small compared to past California spills.

The Los Angeles Times has more on the spill, the timeline so far, and the fossil infrastructure along the coast.