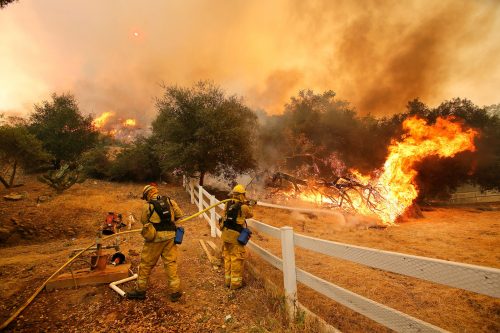 Millions of Canadians could face billions of dollars in damage per year after unknowingly building or buying homes in areas at high risk for climate change impacts like flooding and wildfires, according to a national think tank report that urges investments in emission reductions and climate adaptation to reduce the losses.

The release last week from the Canadian Institute for Climate Choices (CICC) combines information on the country’s current stock of buildings, roads, railways, and electricity infrastructure with two different climate models that show average warming in Canada of 3.3° to 4.4°C by 2050, and 4.0° to 7.4°C by 2100, CBC reports.

Those costs could still be brought down by quickly reducing the greenhouse gas emissions driving the climate emergency and funding measures to adapt to climate impacts, the national broadcaster adds. “Ultimately, we’ll need both adaptation and mitigation,” said report co-author, Dale Beugin, the CICC’s vice-president of analysis and research.

But so far the report warns that “there’s little to no public information on current flood, wildfire, or permanent thaw risks,” CBC writes, “let alone taking into account the future” of global heating. “For example, publicly available government data from local conservation authorities generally show only areas at risk of flooding due to rivers and coasts,” even though a private risk database—available for a fee—indicated far greater risk.

While federal dollars have been available in recent years for flood mapping, there are concerns that provincial governments haven’t been moving quickly enough on mapping, emergency planning, or protecting critical infrastructure. Now, the Institute says owners of existing or proposed buildings should be required to disclose climate risks, and that governments should make risk data publicly available for that purpose.

To reduce the risk to lives and properties, the report recommends buying out 10% of the properties in the country’s highest-risk flood zones, a $1.9-billion investment that would save $200 million per year, CBC says. Governments should also build sea walls and elevate buildings to address coastal flooding, adapt asphalt to withstand higher temperatures and heavier rainfalls, install temperature sensors on railway tracks and adjust train speeds based on temperature, and boost the resilience of power grid components.

CBC has further detail and commentary on the report.