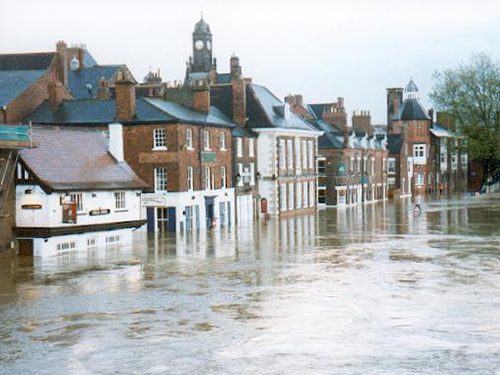 With record-breaking floods becoming the new normal, experts at the United Nations University (UNU) have developed a new tool that generates instant, accurate street-level resolution maps of floods worldwide since 1985.

The free online World Flood Mapping Tool will help all countries, but especially those in the Global South, where flood risk maps are rare and often badly out of date.

The work of UNU’s Institute for Water, Environment and Health (UNU-INWEH) in Hamilton, Canada, with support from Google, MapBox, and other partners, the tool lets users adjust variables to help locate gaps in flood defences and responses, and to plan development of all kinds—for example, where to build or upgrade infrastructure, or develop agriculture.

Users need only Internet access to get a flood map at 30-metre resolution—street by street level. A forthcoming version for more commercial uses, for example by insurance firms, will offer even more precise building-level resolution.

UNU-INWEH says the main difference in the commercial version will be the resolution, since commercial applications require floods to be mapped at the sub-metre level. This level of accuracy requires significant investments in data procurement and computation power.

But a publicly available tool is what’s known as an International Public Good, and this one is designed to support (primarily) developing countries. So nothing will be held back or modified in the public version to drive commercial users to the later version.

“Floods in the past decade have impacted the lives of more than half a billion people, mainly in low- and middle-income countries, and resulted in damages of nearly US$500 billion, roughly equal to the GDP of Singapore,” said UNU-INWEH Director Vladimir Smakhtin. “More recent floods worldwide have added to a fast-growing toll of upended lives, damage and deaths.”

He added that “an estimated 1.5 billion people—greater than the population of Europe—live at risk of exposure to intense flooding. We need to prepare now for more intense and more frequent floods due to climate change, and hope this tool will help developing nations in particular to see and mitigate the risks more clearly.”

Hamid Mehmood, the GIS and remote sensing specialist at UNU-INWEH who led the tool’s development, said a survey by the Institute showed the majority of flood forecasting centres in flood-prone countries lack the ability to run complex flood forecasting models. Floods like those this year in Europe that killed more than 200 people and caused billions of dollars in damage are now up to nine times more likely because of climate change.

“As temperatures continue to rise, the number of flood events will increase along with their severity,” he said. “No place is immune. And yet remarkably few regions, even in wealthy countries, have useful, up-to-date flood maps, because of the cost and difficulty of creating them.”

This produces a detailed map of flood inundation in recent decades, with available overlays of population, buildings, and land use, which can be used for community planning, building zoning, insurance assessments, and more.

To validate the technology, maps generated in less than a minute using the new tool were compared with documented flooding events in Australia, Bangladesh, Cambodia, India, Mozambique, Sri Lanka, and Thailand. They achieved 82% accuracy.

An eighth country used for validation was Canada, where the Red River flows northwards from the United States through Manitoba to Hudson Bay. It flooded extensively in 1950 and 2011. The study area, focused on the agricultural land and small communities between Winnipeg and the US border, flooded in April 2019.

The new tool will incorporate new floods soon after they occur to provide the most up-to-date impact maps for future planning.

“Painting a detailed picture of the historical and potential flood risk areas will be invaluable for any urban and regional planning department,” said UNU-INWEH project collaborator Dr. Duminda Perera.

The more detailed version of the tool being developed for commercial use will provide building-by-building resolution and incorporate building occupancy data. And a free flood risk prediction tool, scheduled for release next year, will use artificial intelligence to generate current and future flood risk maps for three climate change scenarios at the city, district, and river basin levels.