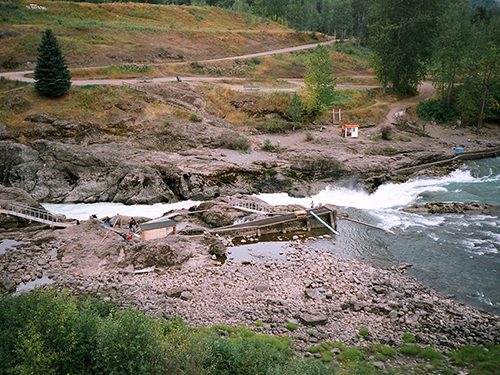 Having been unable to protect a sacred village site from Coastal GasLink’s wrecking ball, the Wet’suwet’en are now fighting to protect a vital watershed as the pipeline company moves to drill beneath a pristine river in northwestern British Columbia.

The access road to a worksite on the Wedzin Kwa (Morice River) “was destroyed and blockades have been erected ‘to stop the drilling under the sacred headwaters that nourish the Wet’suwet’en Yintah and all those within its catchment area’,” reports Bloomberg, citing a release from the Indigenous Environmental Network (IEN).

The news agency adds that “the latest flareup of protests is another snag in a project that’s already behind schedule because of COVID-19 work restrictions.”

Unmentioned in the Bloomberg report is CGL’s recent destruction of an ancient village site to make way for the pipeline, which will deliver fracked gas to the LNG Canada operation in Kitimat, the biggest private investment in Canadian history. Known as Ts’elkay Kwe, the site is revered by the Gitdimt’en clan of the Wet’suwet’en Nation. In a Facebook video taken while the destruction of the site proceeded, Sleydo’ (Molly Wickham) of the Cas Yikh House of the Gitdimt’en can be seen calling for “boots on the ground.”

In an interview with The Tyee in early September, a few weeks after learning that CGL had secured a permit from the BC Oil and Gas Commission (BCOGC) to destroy the village site to make way for its pipeline, Sleydo’ said the site contained legal evidence of her people’s occupation of the land.

“If they come and destroy this, they’re wiping us off this territory,” she said. “They’re erasing the evidence of us being here.”

The B.C. government’s own archaeologists have agreed with those findings, The Tyee notes, citing excavations in 2015 and 2019 that “turned up lithics, material related to stone tools, including an obsidian scraper and flakes, fragments, and shatter—pieces that fell away while tools were being chiselled and formed. The obsidian, a volcanic rock sourced hundreds of kilometres away, would have made its way here through a complex trade network with coastal First Nations trading it for local goods like berries and caribou hides.”

Such discoveries led the archaeologists to recommend that “the pipeline route avoid the site altogether,” The Tyee writes. The report added that, “if avoidance is not possible, mitigation options will be determined in consultation with the client, Archaeology Branch, and relevant First Nations.”

“For industry, that means applying for a site alteration permit and potentially hiring archaeologists to recover any remaining artifacts before the site is destroyed,” explains the Tyee.

While CGL did receive the required permit, defenders of the Ts’elkay Kwe have repeatedly charged that it was not secured in good faith and is, for all intents and purposes, illegal.

“Neither CGL nor the BCOGC undertook consultation with Cas Yikh or the Office of the Wet’suwet’en for the permit,” said IEN in a September 23 release. “The consultation process and the permitting system is deeply flawed and acts merely as a rubber stamp process to allow industry to continue.”

As an example, the IEN says files sent to the Office of the Wet’suwet’en were password protected and could not be opened, “thus the information contained inside was never able to be reviewed, let alone consented to.”

“Silence does not equal consent and to push forward with destroying a culturally significant heritage site is deeply disturbing and violent,” said the IEN statement.

Asked by The Tyee to comment on the status of the permit in early September, the BCOGC responded that “it referred Coastal GasLink’s site alteration permit application to the Office of the Wet’suwet’en in May 2020 but did not receive any comments.”

In its release, IEN says it sent a cease and desist letter to “all parties, including provincial ministers in charge of lands and forests.” The letter invoked Article 11 of the United Nations Declaration of the Rights of Indigenous Peoples, which states: “Indigenous peoples have the right to practice and revitalize their cultural traditions and customs. This includes the right to maintain, protect, and develop the past, present, and future manifestations of their cultures, such as archaeological and historical sites, artefacts, designs, ceremonies, technologies, and visual and performing arts and literature.”

In the wake of Canada’s National Day of Truth and Reconciliation, it is worth noting that the process by which CGL secured its permit to bulldoze the sacred site also stands in hostile contradiction to the 94 Calls to Action recommended by the Truth and Reconciliation Commission of Canada. Most transparently, it is deaf to the 92nd call to action, which urges the corporate sector in Canada to “commit to meaningful consultation, building respectful relationships, and obtaining the free, prior, and informed consent of Indigenous Peoples before proceeding with economic development projects.”

With their ancient village site in ruins and the location of its contents unconfirmed, Sleydo’ and her nation are now turning their efforts toward protecting the Wedzin Kwa. Describing the river as a sacred home to spawning salmon and “a critical source of pristine drinking water,” Sleydo’ warned that “our way of life is at risk … Wedzin Kwa [is the] the river that feeds all of Wet’suwet’en territory and gives life to our nation.”

In the Indigenous Environmental Network release, the Gidimt’en vowed to protect the river and defend Wet’suwet’en law. “We will do everything in our power to protect our waters and to uphold our laws,” they wrote in the September 22 email.

They added: “Gidimt’en Checkpoint has issued a call for support, asking people to travel to Cas Yikh territory to stand with them.”

And as the National Day of Truth and Reconciliation was barely under way, police have violently arrested a land defender determined to protect the Wedzin Kwa, IEN reported yesterday.

“On the National Day of Truth and Reconciliation, reconciliation is dead,’ said Sleydo’. “The government, industry, and police are still invading our yintah.”

The photo is actually from Witset (Moricetown) on the Bulkley River.