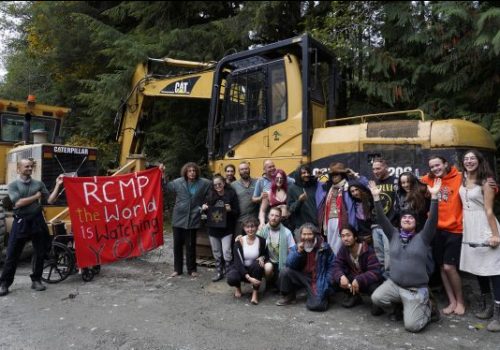 A British Columbia Supreme Court judge has refused a request from Teal Cedar Products to extend an injunction against anti-logging blockades at the Fairy Creek protest site.

In delivering his judgement, Justice Douglas Thompson said the way the RCMP have been enforcing the injunction has led to “serious and substantial infringement of civil liberties, including impairment of the freedom of the press to a marked degree,” reports CBC News. First granted in April, the ban against old-growth logging protests at the site expired this week.

While acknowledging that the rule of law, and Teal Cedar’s bottom line, could suffer if protests were allowed to resume, Thompson wrote that extending the injunction would be neither just nor equitable. “Enforcement has been carried out by police officers rendered anonymous to the protesters, many of those police officers wearing ‘thin blue line’ badges,” He wrote.

That’s an insignia that many racial and environmental justice activists see as a deliberate and aggressive rebuke to movements like Black Lives Matter that are seeking to end the oft-violent status quo.

The judge added that, while he deemed much of policing respectful and peaceable (matching the conduct of the vast majority of the protesters, he added), there have been “disquieting lapses,” including officers pulling COVID-19 masks off protesters before using pepper spray, and the gratuitous destruction of protesters’ property.

Touching upon “a July decision in favour of a coalition of news organizations and press freedom groups objecting to the RCMP’s restriction of media access to the protest sites,” CBC notes that the judge also objected to how police at Fairy Creek sought to hamper the work of journalists through checkpoints, exclusion zones, and police escorts. One reporter told the court  that police interference at Fairy Creek reminded him of what he had experienced while working in China.

“All of this has been done in the name of enforcing this court’s order,” Thompson observed. On that basis, he ruled thatTeal Cedar’s interest in allowing its venture in Fairy Creek to proceed unimpeded was outweighed by “the public interest in protecting the court from the risk of further depreciation of its reputation.”