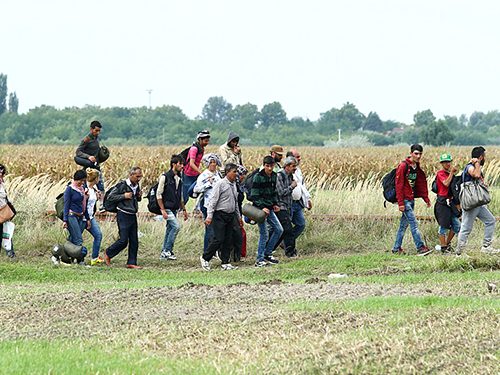 A new report shows that climate change is creating new opportunities for perpetrators of slavery and human trafficking, further threatening the 216 million people forced to migrate from regions affected by climate change in the coming decades.

“Our research shows the domino effect of climate change on millions of people’s lives. Extreme weather events contribute to environmental destruction, forcing people to leave their homes and leaving them vulnerable to trafficking, exploitation, and slavery,” Fran Witt, a climate change and modern slavery advisor, told The Guardian. Her group, Anti-Slavery International, co-produced the report with the International Institute for Environment and Development (IIED).

Climate change is increasing poverty, poor education, limited employment, and other factors that drive modern slavery, the report says. People trying to escape land degradation, economic uncertainty, and food insecurity are targeted by labour agents and traffickers as they migrate to other areas.

“In the Sundarbans, on the border between India and Bangladesh, severe cyclones have caused flooding in the delta, reducing the land available for farming,” The Guardian writes. “With countries in the region tightening immigration restrictions, researchers found that smugglers and traffickers… were targeting widows and men desperate to cross the border to India to find employment and income.” The smugglers then force the victims into sweatshops, hard labour, and prostitution.

An estimated 40.3 million people are already living in conditions categorized as “slavery, slavery-like practices, bonded labour, debt bondage, and forced sexual exploitation,” says the report, based on figures from the 2017 Global Estimates of Modern Slavery. Women, children, and marginalized communities are at greatest risk—citing human rights organization Walk Free, the report states that “one in every 130 women and girls globally were victims of modern slavery” in 2020.

“The notion of slavery is often relegated to the past,” the report states. “But figures show that more people are subject to slavery today than at any time in history.”

With the threat of rising modern slavery, Anti-Slavery International and the IIED are calling for international climate policy debates to recognize the impacts that will cause hundreds of millions of people to migrate in the coming decades. The organizations are also criticizing the world governments that “turn a blind eye” to abuses of migrant rights and labour laws to pursue high economic growth and development.