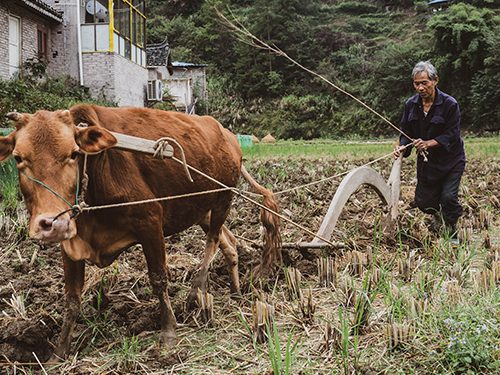 “It’s taken for granted that every city should sacrifice for Beijing, China’s political and cultural center,” Cui Yong, a 43-year-old Tangshan resident, told Bloomberg Green. Tangshan is consistently listed as one of China’s 20 most polluted cities.

But China’s rural provinces have a complicated relationship with industrialization. A decades-long process of relocating facilities away from urban areas has fuelled economic growth in less developed areas, at the cost of human and environmental health.

“We used to think dirty air is just the price we have to pay for making more money. If you are not born in Beijing, you are not qualified to ask for more,” said Cui, who blames a nearby cement facility for his parents’ lung cancer.

As the country sets goals for fulfilling President Xi Jinping’s climate pledges, the skewed distribution of industrial facilities gives a distinct advantage to urban areas with economies linked to services and high-tech industries. “Poorer provinces dependent on coal-powered industries such as chemicals and cement production will have to undergo painful transitions,” says Bloomberg.

Now, for the first time, Chinese officials will need to consider regional equality in environmental policies which will largely be determined by the deadlines for different provinces to reach peak emissions. The dilemma echoes the argument that China’s leaders make in international discussions that developing countries should not be held to the same carbon reduction standards as developed economies that have been driving global emissions for centuries.

What China should do, said Refinitiv analyst Qin Yan, is apply “a domestic version of the Paris agreement”—that is, “to allow regions to have ‘common but differentiated responsibilities’.”

Within the country, that would mean cities like Beijing “should set carbon-neutrality deadlines earlier to buy time for others,” she told Bloomberg.

Some regional officials are also expressing concern about ensuring a just transition. Officials in the autonomous region of Inner Mongolia say the region’s high emissions are linked to power generation that is essential to maintain the national economy, and provinces shouldn’t be responsible for emissions that benefit other areas.

“Who will make up for the loss of the poor regions where resources are mined out and burned, where the environment is damaged, where people have to abandon their industries?” asked Wang Xiaojun, founder of environmental non-profit People of Asia for Climate Solutions. “Cities that have long benefitted from others’ sacrifices should do more, and faster.”

Colossal Fossil Total Projects Peak Oil by 2030, Still ‘Leaves it to Others’ to Meet Paris Targets