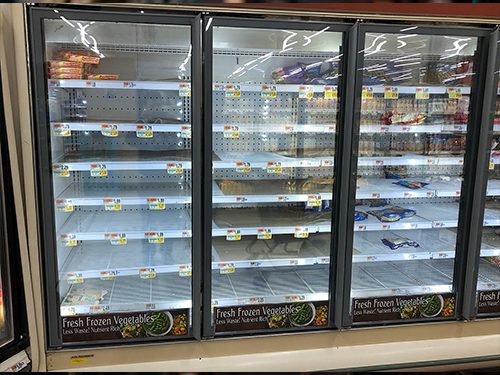 The Biden administration is setting out to cut the United States’ emissions of climate-busting hydrofluorocarbons (HFCs) by 85% in the next 15 years.

The regulation from the Environmental Protection Agency (EPA), finalized last Thursday, is the administration’s first new climate rule. It moves decisively against a super-pollutant found in home refrigerators and air conditions, and “often found to be leaking from U.S. supermarket freezers,” the Washington Post reports.

“When emitted, the chemicals can warm the planet at a rate hundreds to thousands of times higher than carbon dioxide,” the Post says. The regulation implements a law adopted by the U.S. Congress last year in a rare moment of bipartisan support.

The EPA plan begins with a cap that allows companies to make or import HFCs for the next two years. After that, their use will be scaled back through 2036.

“Over the coming years, the newly launched program will bring big changes to the way numerous products that today rely on HFCs—including fire extinguishers, aerosol canisters, and building insulation—are made,” the news story explains. “By 2050, the program will cut nearly the same amount of greenhouse gas emissions as three years’ worth of pollution from the U.S. power sector, federal officials project.”

Avipsa Mahapatra, climate campaigner at the non-profit Environmental Investigation Agency (EIA), praised a “landmark EPA rulemaking” to control “the most potent super-pollutants known to mankind at the moment.” The Post points to the relative ease with which the White House moved on HFCs with Congressional support, contrasting the new regulation with the tortuous process around the administration’s US$3.5-trillion climate and infrastructure plan.

HFCs were first introduced in a successful bid to control the hole in the ozone layer under the 1987 Montreal Protocol, and the move to eliminate their predecessors, chlorofluorocarbons, prevented 2.5°C of additional global warming, one recent study concluded. But scientists later realized that HFCs were still astonishingly effective at warming the atmosphere.

Five years ago, with the Kigali Amendment to the Montreal Protocol, countries set out to reduce future warming by 0.5°C, or as much as 1.0°C with more energy-efficient cooling equipment. But Donald Trump, under pressure from U.S. conservatives led by the Competitive Enterprise Institute, never submitted the amendment for ratification by Congress, and rolled backed Obama-era policies to implement the deal.

Biden has yet to submit Kigali for ratification, even though India and China have signed on, the Post says. “There’s no reason to delay ratification,” Sen. Tom Carper (D-DE), chair of the Senate Environment and Public Works Committee, said in a statement.

But while “we know [Biden] is committed to taking that action,” McCarthy told media, “I don’t have a time window to discuss with you.”

In Project Drawdown’s original list of 100 top climate solutions, refrigerant management placed first, with potential to save the equivalent of 89.7 billion tonnes of carbon pollution by 2050.

'Yellow Floatie' May Use Ocean Waves to Power Ships