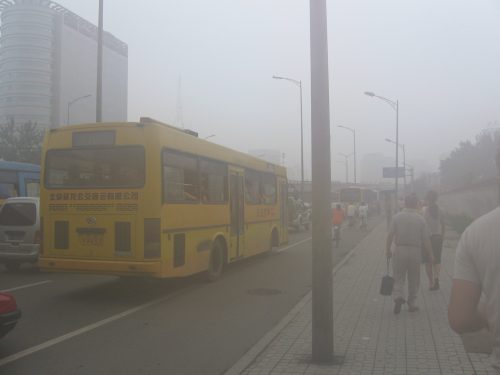 A rare update to the World Health Organization’s global air quality guidelines lead to the conclusion that 90% of the world’s people are breathing unhealthy air.

With last week’s announcement, the WHO is “setting a higher bar for policy-makers and the public in its first update to its air quality guidelines in 15 years,” reports the Associated Press. And the gist of the revision is stark: “Harmful health effects of air pollution kick in at lower levels than it previously thought.”

An example of this “higher bar”: the WHO “slashed the PM2.5 recommendation on an annual basis to 5 micrograms per cubic metre, down from its previous level of 10.”

Energy, transportation, and waste dumps each loom large as air pollution sources, but a pervasive lack of access to clean cooking and heating is also a factor. A recent video report from BBC News reveals how desperately poor villagers in the Indian state of Odisha still depend entirely on coal for heat and light.

“There’s no electricity. There’s no water. If we don’t have coal, we can’t cook. We have no other option. At night we burn coal for light,” a weary resident told BBC. “If it’s harmful, what can we do about it?”

Susan Anenberg, associate professor of environmental and occupational health and global health at George Washington University, told AP the new PM2.5 standard “is going to be extremely difficult to meet,” adding that “there’s very few people on the planet right now that have exposures that are that low.”

With fossil fuel combustion as the leading source PM2.5 pollution, Anenberg added that “what the world decides to do about climate change in the coming weeks will have major impacts on whether or not we’re able to follow a guideline like that.”

“The unenviable challenge for policy-makers will be to respond in a way that minimizes the proven harms to health, as set out by WHO, but with policies that are proportionate, cost-effective, and, crucially, deliver benefits equitably across the country and population,” said Lewis.