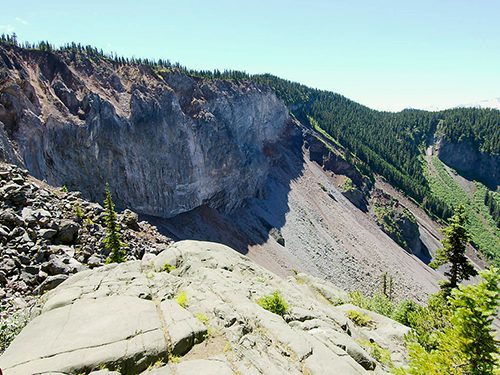 Climate change may be behind two rockslides that shook Squamish, British Columbia Monday, with extremes of heat followed by pounding rain creating ideal conditions for massive slabs of granite to shear off the precipitous face of the Stawamus Chief.

A major tourist and climbing magnet, the famous granite dome south of Squamish was mercifully free of visitors when the first rock slab broke lose at 1:34 AM, writes CBC News.

The second fall happened at around 4:45 PM.

No injuries have been reported, but both the Squamish RCMP and B.C. Parks are warning people to stay away, at least until the spring.

The climbing walls themselves are closed and are being inspected by laser-beam-wielding geophysical engineers from Simon Fraser University. They’re looking for signs that further rockfalls are in the offing.

Monday’s slides were the sixth and seventh this year. Gio Roberti, a serious climber and climate change risk expert at Vancouver-based Minerva Intelligence Inc., believes the summer’s extreme heat may have caused the granite to expand to an unusual degree, causing stress fractures (cracks in the rock) once cold nights began to arrive and the rock contracted. Add pounding rain like the 100-millimetre deluge that pummeled Squamish two days earlier, and you have the perfect recipe for a rockslide.

Roberti said the first slide involved a particularly massive column that was already looking decidedly dicey to climbers back in August. After that, he explained, “it took some time for the water to percolate through all of these cracks and to push the pillar off the wall.”

Squamish resident Anne Bright, who was wakened by the rumble of falling rock, said she was particularly thankful for the rain that night as it was a full moon—the kind of conditions that would typically lure many climbers looking to ascend the granite wall in moonlight.