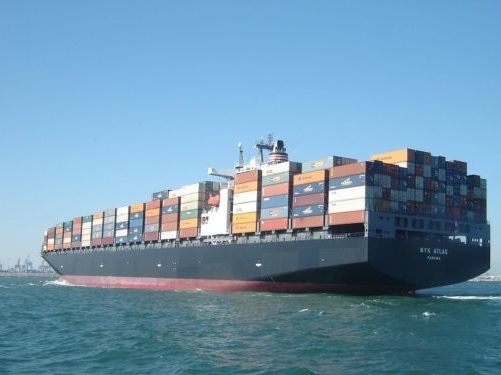 The eight massive vessels, each with capacity for 16,000 containers, will initially run on oil, but Maersk promises to switch to methanol “as soon as possible,” New Scientist reports.

But production of those fuels would have to scale up before Maersk could convert its entire fleet.

New Scientist says other shipping companies are “unfortunately” looking to liquefied natural gas (LNG) as a replacement fuel, likely leading to increased methane emissions during natural gas extraction and transport. Methane is a shorter-lived greenhouse gas than CO2, but it is 84 times more potent over 20 years—the time span when humanity will be scrambling to get climate change under control.

Shipping is a leading global source of GHG emissions, greater than aviation, and is continuing to grow, New Scientist reports.

“If the global shipping industry were a country, it would be the world’s sixth biggest emitter of greenhouse gases,” Seas at Risk Senior Policy Advisor John Maggs, said earlier this year. In June, the United Nations and its marine regulatory agency, the International Maritime Organization (IMO), adopted a “hopelessly weak” target for carbon efficiency improvements in ocean-going vessels.

At the time, Brussels-based Transport & Environment charged the IMO with greenwashing, after the agency agreed to require only a 1.5% annual reduction in carbon intensity, rather than 7% needed to meet targets under the 2015 Paris climate agreement. T&E noted that the industry could achieve the 1.5% annual target through business as usual improvements.

The International Renewable Energy Agency (IRENA) sees a major role for e-methanol in much-expanded global electricity production by 2050, and many low-carbon models rely heavily on bioenergy. However, those projections have raised concerns about future availability of feedstocks and the risks for natural carbon sinks, biodiversity loss, and human rights.