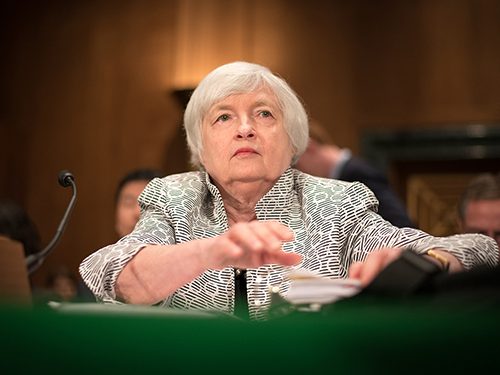 As U.S. Treasury Secretary Janet Yellen sets out to reshape the country’s financial regulations to account for climate risk, she faces a tricky balance between climate hawks calling for faster action and independent banking regulators with the institutional power to stymie it.

“While President [Joe] Biden has called climate change a ‘code red’ crisis, his treasury secretary is poised to resist calls to ask financial regulators to rein in lending to the nation’s worst greenhouse gas emitters,” the Washington Post reports.

Climate advocates are calling for aggressive action as Yellen as she explores how federal banking regulators can protect the country’s financial system from climate-related risks. But “Treasury’s expected hesitancy reflects long-standing reluctance to dictate social policy unilaterally, as well as the complicated bureaucratic structure of U.S. financial oversight,” the Post says.

Yellen’s appointment by Biden followed years of climate-negligent policy during the Trump era. She has since separated herself from her predecessor by initiating climate actions and emphasizing mandatory disclosure of climate-related risk by banks and public companies.

She has taken several other steps to address climate issues, like changing U.S. regulatory guidance for loans from international financial institutions to block further fossil fuel investments and prioritize funding for clean energy. Treasury has also established a climate hub at the Treasury and is “working to implement an international climate financing plan with global counterparts.”

However, Yellen’s review is expected to disappoint climate advocates by focusing narrowly on mandatory disclosure as the next step in U.S. climate finance policy. The U.S. climate community counters that lending to fossil fuel companies “threatens the broader financial system through economic shocks,” thereby justifying a financial review process under federal power “to curb or discourage lending from Wall Street banks to companies that produce large amounts of carbon emissions.”

Treasury officials maintain that using policy to crack down on lending will be difficult because of the “array of independent U.S. banking regulators” that would need to unite behind a climate agenda. They cite mandatory disclosure as a “necessary precursor” to any possible Treasury action enforcing lending restrictions.

But advocates disagree. “Climate risk impacts all the firms that the financial regulators supervise,” Open Markets financial specialist Alexis Goldstein told the Post. “As a convener of regulators, Treasury needs to do more than acknowledge it—it should urge each financial regulator to use every tool at its disposal to tackle climate risks.”

Other anticipated changes could empower regulators to provide advice for assessing carbon-intensive investments and subject banks to “stress tests” to determine their resilience to climate-related financial shocks. However, Sunrise Project Director Justin Guay told the Post that “disclosures and stress tests reveal the problem. They don’t do anything about the problem. It’s not even a job half-done.”

Former Federal Reserve official Stacy Coleman cautioned that before Treasury’s Financial Stability Oversight Council (FSOC) can push new lending requirements, there needs to be some groundwork to better “understand what that means and how something like that would be put together.”

“I think Treasury is going as far as it can,” she said. “It’s not as simple as putting a charge on lending to fossil fuel companies.”

The “complicated bureaucratic structure of U.S. financial oversight” could undermine aggressive policy changes from Treasury, she added. Although the department can urge FSOC to adopt certain policies, it has no power to force independent banking regulators to enforce them.

“If Treasury advances climate rules that other members of FSOC regard as too far-reaching, the council’s membership could fracture,” the Post writes. “That could invite a legal challenge, or dilute the effectiveness of climate rules.”

As Yellen navigates to establish effective climate finance policy, the paper adds, “the potential split between the administration and some of its climate allies represents one of the more vexing challenges” on her agenda.