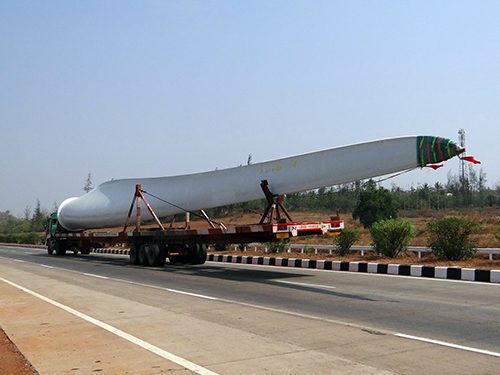 A sleepy Sunday in Luling, Texas (population 5,800) was shattered in late August when a semi-truck and trailer pulling a wind turbine blade was struck by a freight train.

Citing local police shortly after the crash occurred, Austin-based KVUE News said the truck and trailer unit was two-thirds clear of the track when an oncoming Union Pacific freight train hit the end of the turbine blade.

As this video makes alarmingly clear, that last third made all the difference. Reporting (with suitably colourful language) on the scene unfolding before his eyes, the trucker who recorded the video describes the moment when the railroad crossing gate arms come down on the wind turbine blade.

Also caught on the trucker’s cell phone camera is the driver of the wide-load escort vehicle, hot-footing back to his truck when he realizes the train is going to hit, and that the trapped semi needs room to try to pull free before impact.

But it was too late: in the video, the semi is dragged backwards towards the track, flipping on its side, fenders and doors peeling away like an onion.

Citing the police report, KVUE says the two engines pulling the train both suffered “substantial damage” in the collision, as did the truck and turbine blade. Three unoccupied parked cars, a commercial building, a utility pole, and the railroad crossing signal controller were also damaged.

While the truck driver was unhurt, train crew members were taken to hospital, apparently as a precaution. Luling police and Union Pacific Railroad’s own law enforcement are investigating the crash.