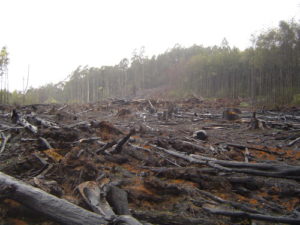 The world’s largest forests are being reduced to a patchwork, and as the patches get more frequent, the carbon leaks and the heat rises. As the great rainforest canopies are shredded into ever-smaller pieces, industrial activity has an ever-greater impact on biodiversity and forest carbon storage.

Each year, reports Climate News Network, a greater proportion of natural intact forest becomes a forest edge. And researchers have demonstrated, repeatedly, that canopy up to 100 metres from the edge of any forest becomes less effective at storing carbon, maintaining moisture and conserving biodiversity.

At the beginning of this century, states a report in the journal Science Advances, researchers pored over high-resolution forest cover maps of the globe to count 131 million fragments of forest: forest subdivided by roads, or mining and quarrying works, or plantations, or clearance for logging, or for plantations or ranches. In just 10 years, this number had reached 152 million.

In Africa alone, the number of forest fragments increased from 45 million to 64 million, an increase of 42%. Across the entire tropics in 2000, the area of forest edge—the irrevocably degraded area—had reached 27%. Ten years later, this proportion was 31%.

“This situation has deteriorated so much that now almost one-third of the world’s tropical forest areas are in edge areas. If deforestation is not stopped, this trend will continue,” said study lead Rico Fischer of UFZ, the Helmholtz Centre for Environmental Research in Leipzig, Germany.

“The edge, unlike the forest interior, is subject to direct sunlight,” he explained. “It is more exposed to the wind. Humidity also decreases in the edge areas. The altered microclimate particularly damages the large trees that depend on a good water supply.”

Forest conservation is a key component in the global efforts to limit climate change and slow global temperature rise. Across the entire tropics, the study found, the average size of these forest fragments had fallen, from 15 hectares in 2000 to 12 hectares in 2010. In those years, an area of 177 million hectares that had once been undisturbed, intact forest has been lost either through direct deforestation, or conversion to forest edge.

This is an area almost the size of Indonesia. By the century’s end, half of all tropical forest will be classified as forest edge. The loss of forest actively delivers extra carbon into the atmosphere to accelerate global heating even more alarmingly, and that could mean even more forest loss, as cycles of drought and fire become more probable in a warming world.

The problem, of course, is the road: without new roads, miners, farmers, ranchers, and loggers could not have made much impact on what were once vast, intact forests in tropical Africa, the Amazon basin, and southeast Asia.

And the problem will continue: within the next 30 years, there could be another 25 million kilometres of new road, enough to circle the globe 600 times, and most of these in the developing world—that is, the tropics.

Where these roads divide the forest, they precipitate carbon loss: at the beginning of this century, forest edges surrendered around 420 million tonnes of carbon a year to the atmosphere. By 2010, this had gone up to 450 million.

Every year now in the tropics, the clearance, destruction, or degradation of forest releases between 1,000 and 1,500 million tonnes of carbon. The loss of efficiency at the edge of the surviving forest could increase this figure by almost a third.

A Halt to Deforestation

And, of course, the gaps between surviving patches of tropical forest are getting bigger. This is good for neither the trees nor the creatures that live under the forest’s protection.

“This makes the long-term survival of animal species such as the jaguar, which depends on large, connected forest areas, more difficult,” said study co-author Franziska Taubert of the UFZ Leipzig centre.

At the present rate of deforestation, half of all tropical forest by the end of this century will be classed as forest edge, and this forest edge will release 530 million tonnes of carbon into the atmosphere every year, the scientists calculate. If the rate of tropical deforestation is cut by half, that proportion will still increase to 40%. If all deforestation is stopped by 2050, the proportion could be held to 30%.

“Only if deforestation of the rainforest is stopped from 2050 onwards can emissions be limited to a maximum of 480 million tonnes of carbon,” Fischer said. − Climate News Network