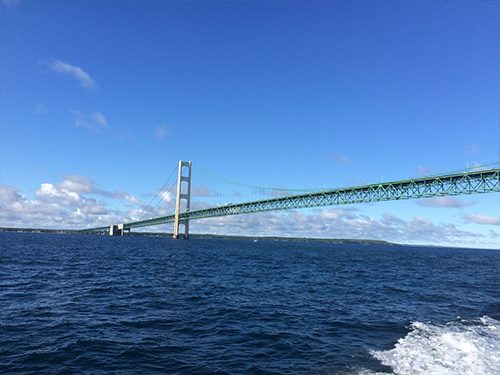 Allowing Calgary-based pipeliner Enbridge Inc. to maintain its Line 5 pipeline by tunnelling beneath the Straits of Mackinac could generate US$41 billion in climate damages over the next 50 years, new expert testimony submitted to the Michigan Public Service Commission states.

To pursue the project, Enbridge will need a permit from the Commission. The submission by Erickson and Howard marks “the first time any Michigan agency has agreed to consider greenhouse gas emissions in its analysis under the Michigan Environmental Protection Act,” notes Grist.

“By enabling the continued, long-term production and combustion of oil, construction of the project would work against, and therefore be inconsistent with, the goals of the global Paris Agreement and Michigan’s Healthy Climate Plan,” Erickson testified. Introduced by Governor Gretchen Whitmer in 2020, the goals of the Healthy Climate Plan include securing clean energy jobs and making the state carbon-neutral by 2050.

In response to this testimony, Enbridge is “likely to argue that there is no feasible alternative,” said Margrethe Kearney, senior attorney at the Environmental Law & Policy Center. However, that claim would have to contend with further expert testimony contending that Michigan’s energy needs can be met without Line 5 fossil fuels.

North of the border, “Canadian officials, including Prime Minister Justin Trudeau, citing economic concerns and energy security, have urged the court to stall the shutdown of the pipeline,” notes Grist.

While the state regulatory process unfolds, four months of court-ordered mediation between the state and Enbridge officially ended last week without a settlement.

“In a September 15 court filing in the U.S. District Court for the Western District of Michigan, Michigan Attorney-General Dana Nessel said the state feels no further mediation sessions would be helpful,” writes The Globe and Mail.

Now, “with still no final settlement reached, the mediator plans to submit an additional report with recommendations, something that [Nessel] says violates the terms of their position as mediator,” Grist says. She has formally asked the presiding judge “to prohibit or disregard any additional reports filed by the mediator.”

Enbridge “remains committed to resolving the dispute,” writes the Globe, citing a release from the company stating that its goal “from the beginning has been to work cooperatively to reconcile interests, resolve disputes, and move forward in the best interest of people throughout the region.” Asserting that it has participated in the process “in good faith,” Enbridge has vowed “to seek resolution, whether through mediation or pursuing diplomatic solutions consistent with the U.S.-Canada Transit Pipelines Treaty and by asserting [its] rights in the courts.”

The Globe reports that the 1977 treaty states that “the only justifications for impeding the flow [of oil through Line 5] are natural disasters or emergencies—and these may only be temporary interruptions.”

Enbridge is scheduled to submit its testimony to the Michigan Public Service Commission in December, with a decision expected sometime in 2022.

Meanwhile, Line 5 continues to ferry oil through the Straits of Mackinac, to the tune of more than 87 million litres every day.