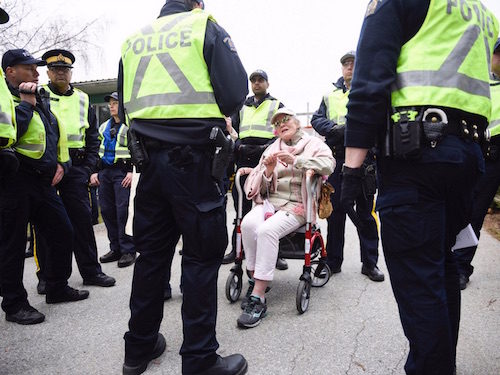 Stark differences in the police response to Fairy Creek protesters versus anti-vaccine passport demonstrators suggests that whether one is assaulted with pepper spray or merely met by a polite presence depends on the colour of one’s skin.

“There is no accountability,” xʷ is xʷ čaa Kati George-Jim told CBC News. xʷ is xʷ čaa, a member of the T’Sou-ke Nation, has been a part of the ongoing protest against old-growth logging in the Fairy Creek watershed on the southwest tip of Vancouver Island in British Columbia, and has been experiencing back pain and mental trauma since being violently removed from the protest site by police.

To date, over 890 protesters have been arrested at Fairy Creek, and there have been reports of peaceful activists being pepper-sprayed and dragged away by their hair or clothes.

But, last week, as crowds of mostly white people gathered in cities across British Columbia—blocking roads to hospitals, verbally assaulting health-care workers, and, in at least one case, physically assaulting an employee—a very different scene played out.

“Police presence was minimal and one person was arrested,” reports CBC.

“Protesters with alleged ties to white supremacist circles yelled and pelted gravel at Liberal Leader Justin Trudeau. One man—the former leader of a local People’s Party of Canada riding association—was arrested Saturday and charged with assault with a weapon,” CBC writes of the anti-passport and anti-mask protests. Other protestors carried signs linking vaccination campaigns to Adolph Hitler’s plans for genocide.

The marked difference in the nature of the police response to the two protest movements shows that white protesters and Indigenous and Black protesters are “fundamentally treated as different forms of public threat,” said Monaghan. That is, where protestors of colour seem targets of “proactive public order policing, where officers get ready for protests and confrontation ahead of time”—including, often, heavy surveillance and the kind of detailed planning that “leads to much more repressive” policing—white protestors get treated to “reactive public order policing.”

The issue, said Kwantlen Polytechnic University criminology professor Irina Ceric, is that too many members of the RCMP still see a Black or Indigenous person as inherently more threatening than a white person.

“There is evidence that the police are more hands-off with anti-vaccine and anti-mask protests because there seems to be some… level of affinity there,” she said. “It’s really difficult now to argue that there isn’t really systemic racism within policing agencies across Canada.”

It is the fear (and experience) of such systemic racism that left xʷ is xʷ čaa shaking her head at a recommendation from the B.C. RCMP media relation officer that the public should simply report allegations of police violence at Fairy Creek to the Civilian Review and Complaints Commission for the RCMP.

“We’re not believed and the process is traumatic, having to bring forward that violence and trauma of abuse to the system or the institution that did that harm,” she said.