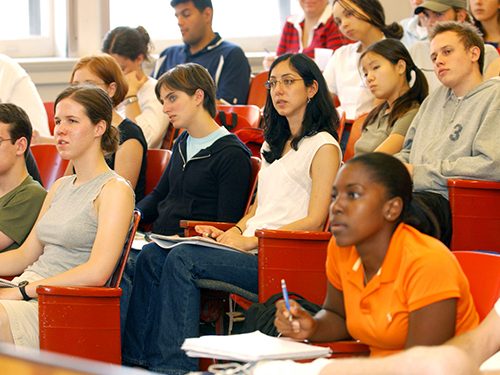 Having been born into the existential crosshairs of the climate crisis, Generation Z members, are vowing to dedicate their careers, and their lives, to finding solutions.

In the United States, colleges across the country—as well as the Biden administration—are finding ways to support those students’ career choices, reports The Guardian.

“Once you learn how damaged the world’s ecosystems are, it’s not really something you can unsee,” said Boston-based sustainability consultant Rachel Larrivee, 23. For her, “there’s no point in pursuing a career—or life for that matter—in any other area.”

Many of Larrivee’s contemporaries agree, with “survey after survey” indicating that “young people are not just incorporating new climate-conscious behaviours into their day-to-day lives—they’re in it for the long haul,” The Guardian writes.

Such a commitment shows in the fact that “surging numbers of students are pursuing environmental-related degrees and careers that were once considered irresponsible, romantic flights of fancy compared to more ‘stable’ paths like business, medicine, or law.”

And colleges around the country are working to support this surge. One example: the recent launch of a Sustainability Across the Curriculum program at the University of Southern California in Los Angeles. The program aims “to teach the college’s 20,000 undergraduate students how their majors intersect with sustainability and the environment.”

The school may prove to be the right incubator for such a program, with a 2020 USC survey finding that more than 90% of its undergraduates are, at the very least, “interested” in on-campus sustainability.

Pursuing an environmental degree of some sort can also make good financial sense. Christopher Schlottmann, global curriculum coordinator at New York University’s environmental studies program, told The Guardian that while a residue of scepticism remains about whether it’s possible to make a living by protecting the environment, it’s increasingly misplaced.

“If you understand how climate change works, then a bank should actually really want to talk to you because they want to hedge their risk,” he said.

Noting a “clear-eyed confidence in science, policy, and each other,” The Guardian writes that Gen Zers are also deeply committed to redressing the harrowing injustices that have long attended the fossil fuel economy. (See here for the BBC’s recent video on the tragic public health and ecosystem impacts of natural gas flaring on the citizens of Nigeria.)

Poised to become a significant conduit for high school students looking to launch themselves into climate-friendly careers—provided it gets the go-ahead from Capitol Hill—is the Biden administration’s proposed Civilian Climate Corps.

“I decided to pursue this industry because I think I’m in the first generation who knows the extent to which climate change poses an existential threat to life on Earth,” Larrivee told The Guardian.

“And also the last generation who may be able to do anything about it.”