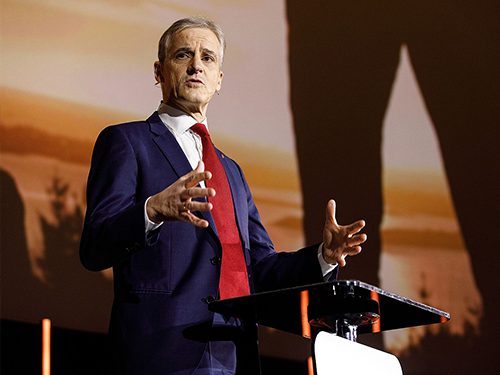 Voters in Norway elected a new government, environmental parties drew less popular support than expected, but a new centre-left coalition was still expected to usher in tighter controls on oil and gas exploration after an election Monday that was largely dominated by public fears about the climate emergency.

“The vote came at the end of a tumultuous summer in Europe, marked by scorching temperatures and flooding in many countries,” the New York Times reports. “Once a distant prospect for many Norwegians, global warming became a more tangible reality that all political parties in the wealthy Nordic nation of 5.3 million could no longer ignore.”

The result was an election campaign focused on the “growing contradictions between the country’s environmental aspirations and its dependence on its vast oil and gas reserves,” the Times adds.

In the end, 26% of the vote went to the Labour Party, helmed by ex-foreign minister Jonas Gahr Støre. His coalition government is expected to include the Center Party, as well as “a smaller left-wing party that has demanded a more aggressive response to tackle climate change, and that could make any coalition deeply divided over fossil fuels and taxes,” the news story states.

Last month’s dire science assessment from the Intergovernmental Panel on Climate Change, combined with deadly floods in Germany and Belgium and wildfires in Greece and Italy, had brought the climate emergency to the forefront and elevated Norway’s Green Party to third place in election polling.

Another turning point was the 1.5°C pathways report released in May by the International Energy Agency. It called for an immediate end to new fossil exploration and projected deep reductions in demand—by 75% for oil and 55% for natural gas—by 2050. Between the two blockbuster reports, “climate wasn’t necessarily supposed to be such a central issue, and all of a sudden, it was,” said climate and oil policy researcher Bard Lahn of Oslo’s Center for International Climate Research.

But in the end, “smaller Norwegian parties with the most aggressive stance toward fossil fuels fared less well than expected Monday,” the Times says. “Several parties shared a pro-climate platform but differed on other issues, scattering green votes and keeping the parties under 8%,” the threshold for seats in parliament. That resulted raised “questions about Norway’s readiness to take a hard look at its economic dependence on fossil fuels.”

In a country where 70% of new vehicle sales are electric and an already ambitious carbon tax is set to triple by 2030, scientists say the environmental impacts of fossil fuel production still dwarf the benefits of climate action.

“Norway tries hard to act as a pro-nature, pro-diversity society, but our main source of wealth comes from oil and fossil fuels,” University of Oslo social anthropology professor Thomas Hylland Eriksen told the Times. “That tension became increasingly visible with this climate election.”