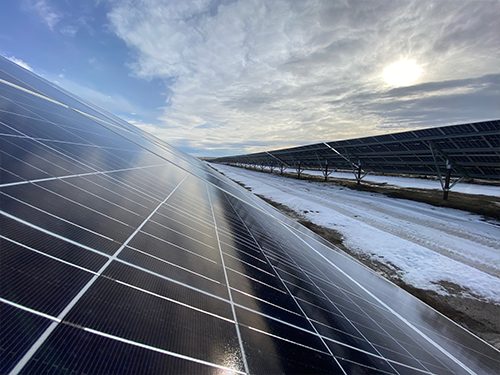 U.S. President Joe Biden unveiled plans last week to boost solar energy from four to 45% of his country’s electricity supply by 2050, although the details of the White House roadmap will be up to members of Congress to decide.

“There is little historical precedent for expanding solar energy, which contributed less than 4% of the country’s electricity last year, as quickly as the Energy Department outlined in a new report,” the New York Times reports. “To achieve that growth, the country would have to double the amount of solar energy installed every year over the next four years and then double it again by 2030.”

That ambitious goal “is in line with what most climate scientists say is needed to stave off the worst effects of global warming,” the Times adds. But “it would require a vast transformation in technology, the energy industry, and the way people live,” including “vast upgrades” to the U.S. electric grid.

Biden underscored the urgent need for action earlier in the week, during a tour of areas of New Jersey and New York City hit by Hurricane Ida. “They all tell us this is code red,” he said, during a stop in the New York borough of Queens. “The nation and the world are in peril. And that’s not hyperbole. That is a fact.”

Last month, a memo from the U.S. National Renewable Energy Laboratory concluded that Congressional action on tax credits and manufacturing could bring U.S. solar capacity to 40% of total demand by 2035, while creating up to 1.5 million jobs. But the US$3.5-trillion job, energy, and climate transformation package with which the White House hopes to tap into that promise is still facing a rough ride—most significantly from Democratic senators like Joe Manchin (D-WV), who told NBC’s Meet The Press he won’t support the full package.

“We don’t have the need to rush into this and get it done within one week because there’s some deadline we’re meeting or someone’s going to fall through the cracks,” he said.

“No, it is absolutely not acceptable to me, I don’t think it’s acceptable to the president, to the American people, or to the overwhelming majority of the Democratic caucus,” Sanders told the Cable News Network. “I believe we’re going to all sit down and work together and come up with a $3.5 trillion reconciliation bill, which deals with the enormously unmet needs of working families.”

The Times has more on what it will take to make the administration’s solar expansion goal a reality. “That kind of quick acceleration of deployment is only going to happen through smart policy decisions,” said U.S. Solar Energy Industries Association President Abigail Ross Hopper. “Having a goal is important, but having clear steps on how to get there is the issue.”

Wood Mackenzie principal analyst Michelle Davis agreed on the need to double or even quadruple U.S. solar deployment, but cautioned that a tenfold increase “will be an incredible challenge for this industry, which is already running up against bottlenecks and challenges as it has grown over the last few years.”

Utility Dive says last week’s release of the Energy Department report was accompanied by a letter from 750 companies in the solar industry, calling on Congress to extend and expand the existing investment tax credit (ITC) for solar and make it available to a wider range of technologies.

“Utilities are grappling with how to handle enormous growth in interconnection requests, both for utility-scale and distributed solar projects. This initiates transmission and distribution studies, which can take multiple years. Even once the studies are completed, the costs can be so high that many projects are deemed unviable,” Davis told the industry newsletter. And “historically, new transmission and distribution buildout hasn’t kept up with the pace of renewable energy deployments.”

So “while financial incentives will help increase solar deployment, Davis said, other federal and state policies will be necessary to accelerate the growth of solar and ensure the U.S. hits the targets outlined in Wednesday’s report,” Utility Dive writes.

USDOE’s Solar Futures Study also points to the role of decentralized power in an increasingly renewable grid, Microgrid Knowledge reports. “We can no longer look at solar technologies in isolation—we must look at how they interact with the full energy system,” wrote Becca Jones-Albertus, director of the DOE’s Solar Energy Technologies Office, in an introduction to the report. “Technologies like power electronics and storage have the potential to reshape how energy is produced and consumed, enabling renewable microgrids that can keep the lights on after a major storm or shift energy consumption to maximize cost savings.”

The Washington Post has a profile of a First Solar manufacturing plant outside Toledo, Ohio, that is under pressure to increase its solar panel output, at a time when imports from China’s massive solar industry have been disrupted by concerns over forced labour in Xinjiang.

“Customs and Border Protection this summer began blocking the import of solar panels that it believed could contain materials from Hoshine Silicon, a Chinese company that it said appeared to be coercing workers from the persecuted Uyghur minority by threatening them or restricting their movement,” the Post writes. “CBP officials have declined to say how many imports they may ultimately block, but Hoshine is the world’s largest manufacturer of a material used to produce silicon-based solar panels, making it a ubiquitous industry supplier.”

That reality explains why Biden’s ambitious solar plans “are now running up against another White House priority: promoting human rights,” the Post says.

Late last month, the administration unveiled plans to make it less expensive for solar and wind developers to site new projects on federal lands, Reuters reports, part of a “broader effort” to “fight global warming by boosting clean energy development and discouraging drilling and coal mining.” The announcement “underscores the renewable energy industry’s voracious need for new acreage,” the news agency adds, at a time when annual rents can be nearly 10 times as higher than they would be on private land.