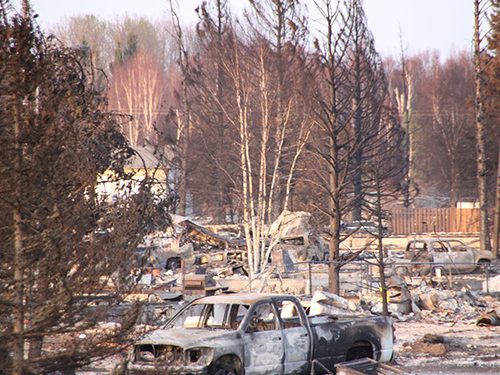 Climate-driven disasters like wildfire are generating persistent economic harm that could tally up to more than a third of global GDP by 2100, an international study has found.

“The researchers concluded the climate crisis’s impact may cut about 37% from global GDP this century, equating to more than twice the drop seen in the Great Depression and compared to only 6% if lasting economic harm from warming was discounted,” writes The Independent. The study was undertaken by academics from Cambridge University, Imperial College London, and University College London, along with economic experts from Switzerland, Austria, Germany, and the United States.

That harm has been discounted to date, the news story adds, with “almost all previous estimates [assuming] that climate-driven floods, droughts, and wildfires do not dent economic growth in a persistent way.”

Noting that the impact of wildfires and floods on growth was “unlikely to be zero,” co-author Chris Brierley told The Independent that “if we stop assuming that economies recover from such events within months, the costs of warming look much higher than usually stated.”

While “we still need a better understanding of how climate alters economic growth,” he added, “even in the presence of small long-term effects, cutting emissions becomes much more urgent.”

As does getting the social cost of carbon right. Whereas the United States currently pegs its carbon price at US$51 per tonne of CO2, Brierley and his economist colleagues found the true cost could be upward of $3,000 per tonne.

The report authors add that policy-makers have been doing a particularly bad job of modelling carbon prices for the Global South, which is being particularly ravaged by the climate crisis.

The study arrives in tandem with a report by Deutsche Bank warning that sea level rise alone could put 20% of global GDP at risk by 2100. “Since the start of the 20th century, average sea levels have increased more than 21 centimetres,” with “about a third” of that rise occurring over the past 25 years,” the Financial Post writes. Further sea level rise, floods, and storm surges are “forecast to cost the world economy $14.2 trillion in lost or stranded assets by the end of the century, with the most vulnerable areas on the coasts of the northeastern U.S., northwestern Europe, northern Australia, and big sections of Asia.”

Should no action be taken, at least 187 million people will be forced from their homes.

Port cities are in particular peril, with damages projected to run as high as $111.6 billion by 2050 and over triple that by 2100, “placing severe pressure on trade dependent developed and developing economies,” Deutsche Bank writes.

The United States will need to pay particular heed to the impact of rising seas on its airports and energy infrastructure, with both under significant threat from unruly water. “Under a rapid sea level rise scenario, the number of U.S. energy facilities vulnerable to storm surge threats might grow by 15 to 67%,” the study states.

Harvard to Divest Fossil Fuels, Sets Example for Other Institutions