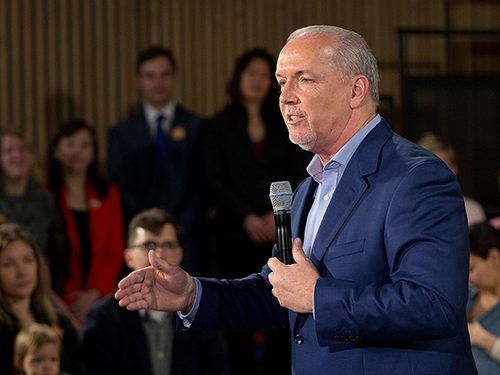 Barely three years after environmental and Indigenous leaders in British Columbia endorsed the province’s CleanBC climate plan, those same leaders have withdrawn their support and are demanding a plan that matches the scale of the climate crisis.

“As we come to the end of what has been a devastating summer for many British Columbians—marked by the June heat dome event and the loss of nearly 600 people, hundreds of wildfires leading to people losing their homes, days of smoke, thousands of evacuations—the time has come for a major reboot of CleanBC,” begins an open letter to Premier John Horgan recently published in The Tyee. The letter was co-written by Grand Chief Stewart Phillip, president of the Union of BC Indian Chiefs, Hannah Askew, executive director of Sierra Club BC, Tzeporah Berman, international program director with Stand.earth, Andrew Gage, staff lawyer with West Coast Environmental Law, and Squamish Nation councillor Khelsilem.

The letter points to the Horgan government’s much-trumpeted assertion that its CleanBC plan, tabled in December 2018, is “the strongest climate plan in the country”. The authors note that, while that may still be true, it only shows “how weak government plans are across Canada.” Three years on, they say, CleanBC “does not match the scale of the crisis and requires a profound jolt.”

Case in point: far from declining, B.C.’s emissions “have increased in each of the last four years for which we have data.” And while CleanBC “aims to cut emissions by 40% by 2030,” that’s at least 5% less than what the Intergovernmental Panel on Climate Change “now says is required.”

The authors add that CleanBC policies to date will leave the province between 28 and 44% short of its already insufficient 2030 target. And details on how the province will hit its 2040 and 2050 targets are pretty much non-existent.

“The province is not investing nearly enough in climate programs and infrastructure to meet the urgency of the task, ensure a just transition for workers, and create decent work in a new, zero-carbon economy,” they write.

CleanBC also has nothing to say about forest emissions, when the province’s forests “emitted more than three times as much CO2 as the rest of the B.C. economy” in same the year the plan was tabled.

And then there is the insidious problem of natural gas. CleanBC is “no match for the B.C. government’s support for the fossil fuel industry, specifically gas fracking and liquefied natural gas,” the letternotes states. “In 2020 alone, B.C. provided C$1.3 billion in subsidies and incentives to the oil and gas industry.”

In return for such largesse, “just one project, LNG Canada (Phase 1), is projected to add four to six million tonnes of GHGs per year when it is operational in 2025.”

“Climate change is not some distant threat,” the letter to the premier concludes. “It is an emergency in the here and now that is killing our neighbours and displacing entire communities. We need you to step up and lead in a manner that this crisis demands.”

Ford Government Broke the Law by Failing to Consult on MZOs, Court Rules