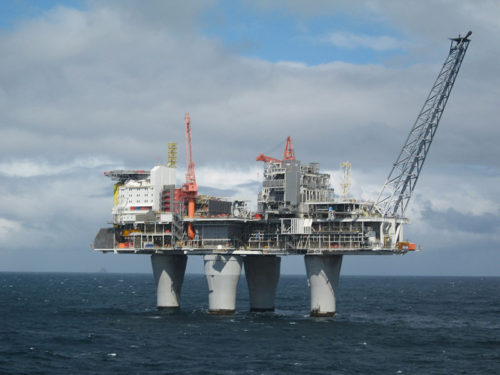 The Terra Nova oilfield southeast of St. John’s, Newfoundland will produce an additional 70 million barrels of oil over the next decade under an agreement between Suncor Energy, Cenovus Energy, and Houston-based Murphy Oil to restart the shuttered project.

Terra Nova opened in 2002, was shut down for maintenance in 2020, and has not produced any oil since, the Globe and Mail reports. “There were concerns the project would be permanently closed, due in part to a decline in oil prices, eliminating hundreds of jobs and a major source of provincial government revenue.”

But C$505 million in provincial government subsidies and federal backing turned out to be the sweetener the three fossils needed to begin refurbishing what the Globe describes as a “massive, floating production storage and offloading vessel, 18 stories tall and three football fields in length.”

The news report says the provincial funding includes $205 million to support “local onshore and offshore work”, with matching funds from the companies. The project is expected to create 1,000 direct and indirect jobs.

Suncor also announced plans to increase its ownership share in another troubled Newfoundland offshore project, the White Rose oilfield, as long as Cenovus proceeds with plans to expand the field, The Canadian Press wrote yesterday. Suncor had previously written off $425 million it had invested in White Rose.

Suncor CEO Mark Little said the companies couldn’t have restarted the Terra Nova project without taxpayer support [though he didn’t quite say it that way out loud—Ed.].

“We appreciate the deep collaboration and support from the provincial and federal governments, which has been crucial to helping us reach this important milestone,” he said. “The decision to move forward with the Terra Nova project is a concrete example of Suncor’s commitment to invest in projects that have strong economic returns.”

“It’s a good night for our oil industry and a good night for [Newfoundland and Labrador] as a whole!” tweeted provincial Industry, Energy and Technology Minister Andrew Parsons. “Terra Nova being sanctioned means 100′s of NL’ers start heading back to work tomorrow.”

Suncor’s partner in the two oilfields, Cenovus Energy, is led by CEO Alex Pourbaix, recently seen demanding $52.5 billion in taxpayer subsidies to decarbonize his industry’s production emissions by 2050. The Energy Mix readers later responded with their own ideas on how much decarbonization $50 billion can buy.