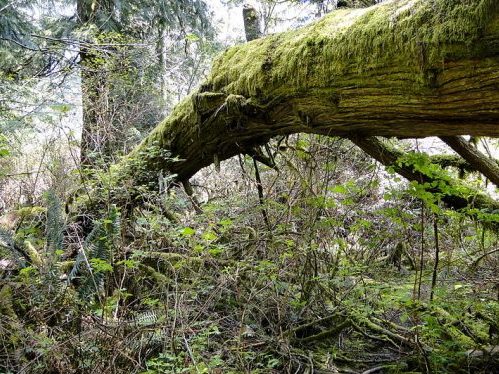 A major shift in tactics by those seeking to protect British Columbia’s Fairy Creek could help the old-growth watershed avoid same fate as Clayoquot Sound, says a Canadian environmental journalist and author.

The blockades on southwest Vancouver Island “all looks terribly familiar,” writes Arno Kopecky in a recent op-ed for the Globe and Mail. Arrests are now “poised to surpass the mark from 28 years ago in Clayoquot Sound, when 856 people were arrested for most of the same reasons as today.” [That happened earlier this week—Ed.]

What’s changed, says Kopecky, “is tactics, technology, and the role of First Nations.”

The first thing to understand, says Kopecky, is the speed at which the story can seem to change, courtesy of social media. Veteran environmental advocate Tzeporah Berman, one of the leaders of the Clayoquot campaign, told Kopecky that, back in 1993, her team “would do the blockade in the morning and then drive to the Friends of Clayoquot office, type up a press release, and get it out by fax.” Today, he notes, a Fairy Creek blockader can get a face full of pepper spray in the morning and “watch the footage go viral by dinner.”

And blockaders are getting pepper-sprayed, and worse, by RCMP officers whose heavy-handed repression (including dragging some demonstrators by their hair) grew bad enough in mid-August to get B.C.’s public safety minister involved. The escalation in police aggression is another way in which Fairy Creek differs from Clayoquot, says Kopecky.

On the blockader side, tactics have also escalated since 1993, “when arrests were more of a symbolic ploy for attention than a physical attempt to halt logging.”

And then there is the “most devilish difference between Clayoquot and Fairy Creek,” the one upon which “everything may hinge.” Back in 1993, First Nations were largely united in their defence of Clayoquot Sound, taking forestry company MacMillan Bloedel to court and winning, while white protestors from around the world led much of the physical blockade in the forests. But 2021 finds a far murkier picture.

At Fairy Creek, Indigenous leaders like Pacheedaht Elder Bill Jones are heading the blockades, and, for some, the location has become “synonymous with the struggle for Indigenous autonomy against the forces of colonization,” writes Kopecky. On the other side, the elected chiefs of the three First Nations in whose territories the blockades are located (Pacheedaht, Ditidaht, and Huu-ay-aht) asked the blockaders to go home after signing an agreement with the province’s NDP government to defer all logging within the Fairy Creek valley itself—though the remainder of the 2,000-hectare watershed is still open for business.

B.C. Premier John Horgan has been quick to seize on such comments as proof “that he’s enforcing old-growth logging not in spite of Indigenous rights, but because of them.”

Yet Grand Chief Stewart Phillip, president of the Union of BC Indian Chiefs, is calling for critics and journalists to understand that they can no longer “parcel off” old-growth forests as merely an economic issue or an Indigenous cultural rights issue.

“You must remain focused on the fact that old growth forests in British Columbia are at the point of extinction,” he told Kopecky. “We all have a responsibility to do whatever we can to protect them.”

Noting the federal government’s recent earmarking of C$2.3 billion to protect a quarter of Canada’s land base in under four years, and federal Environment Minister Jonathan Wilkinson’s “beguiling” campaign offer of $50 million to preserve the province’s remaining old-growth (see here for The Tyee’s take), Kopecky concludes by recommending a solution that could “honour Canada’s obligation to First Nations, their land, and the Paris Agreement all at once”: paying First Nations “not to log their old growth.”