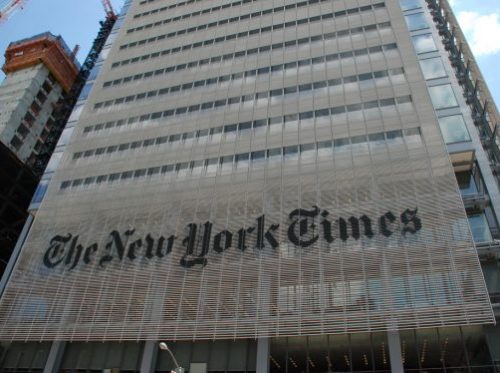 A burgeoning campaign is calling on the New York Times to stop publishing fossil fuel ads, which one journalist has described as “propaganda” from an industry attempting to “placate public outrage about climate change.”

“These advertisements, many of which are created for the industry by the Times, routinely run on the paper’s website alongside its journalism,” veteran climate reporter Emily Atkin writes in her Heated newsletter. “They attempt to sell readers not on a product, but on an idea: that fossil fuel companies are helping save the planet.”

The falseness of that idea, she notes, has been “repeatedly demonstrated by the Times’ own reporting.”

On the campaign site, the Ads Not Fit to Print coalition contends that the Times—one of the most prestigious and highly-read newspapers in the world—“legitimizes oil and gas companies’ greenwashing and boosts their social licence to operate” by agreeing to run their ads.

Given that the fossil sector is driving the climate crisis, “it’s simply indefensible” for the Times to generate revenue by promoting it, states the organization.

The Times says it needs the ad revenue to keep up its reporting. “Those advertising dollars are essential to our ability to provide journalists with the resources to do important, time-consuming work, including the climate reporting that is read by millions of users per week,” said Times communications director Nicole Taylor in an emailed statement to Heated. However, Atkin notes, there is a lot of doubt over that argument. “The Times is increasingly relying on reader subscriptions more than ads to fund its journalism, and so some current and former newsroom employees are skeptical that revenue is the reason.”

In its campaign, Ads Not Fit to Print notes that the Times is already losing readers who are disgruntled by its standing relationship with the fossil fuel industry. Changing its policies, they say, could be an opportunity for the newspaper to retain those subscribers and attract new ones.

The campaigners also hope other companies will follow suit if the Times stops accepting advertising from fossil companies, Atkin reports.

“Our goal is to get fossil fuel money out of the media entirely,” said Genevieve Guenther, whose group End Climate Silence is part of the campaign. “But we wanted to begin with the Times because they do seem to be one of the news outlets that really gets the climate crisis.”