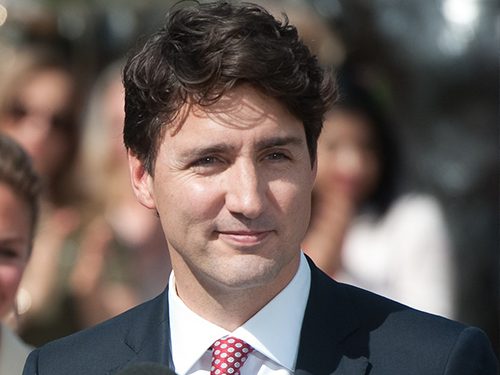 A border carbon adjustment made an appearance as a campaign issue, parties’ climate platforms came in for renewed scrutiny, and the Liberals’ plan received an accidental endorsement from the Green Party leader and a deliberate one from her former B.C. counterpart as Canada’s federal election entered its second-last week.

On the campaign trail, all three major national parties received different degrees of pushback on their climate plans, while the latest in a series of veteran political observers pointed to climate as the wedge issue that could win the election for Justin Trudeau’s Liberals.

“If anything, climate change politics look more likely to trigger the chain reaction the Liberals need to eke out a win than pandemic-related rhetoric,” wrote Toronto Star columnist Chantal Hébert. “It is one front where there is a clear difference between the Liberals and the Conservatives. That difference is not to [Conservative leader Erin] O’Toole’s advantage.”

A Conservative government “would turn the clock back on Canada’s climate change efforts, dialing down its ambitions as well as resuming the push for more pipelines,” Hébert added. “Given that, it would be hard for the New Democrats to spend the second half of the campaign arguing with a straight face that when it comes to the existential environmental question of the era, the Liberals and the Conservatives are one and the same. That contention does not really pass the smell test.”

A Star editorial reaches a similar conclusion, noting that O’Toole’s contentious decision to add a carbon price to his campaign platform means his party can no longer be dismissed as “no-shows on climate”. But the Tories’ carbon “levy” (since, as the Star points out, they can’t and won’t call it a tax) starts out at C$20 per tonne and rises to $50,” far lower than the level economists say is needed to change behaviour,” the paper notes. And “from this inadequate starting point the Conservatives would then get seriously weird. Instead of simply rebating the carbon levy to consumers, they propose setting up ‘personal low-carbon savings accounts’ for every Canadian.”

The editorial echoes other critiques casting that plan as “something like an Optimum card for the climate: the more you spend on carbon fuels, the more points you earn to spend on the list of officially approved products designed to let you ‘live a green life’.” And like others, the Star isn’t sold.

“To be kind, this is unnecessarily complicated,” the editors state. “To be less kind, it’s the kind of bureaucratic scheme that conservatives think those on the left like to dream up. But here it is, proposed by the Conservative party itself. And to make things worse, it provides a perverse incentive—the more you spend on carbon, the more credits you get. Surely the goal is to make people burn less, not more.”

In British Columbia, campaigners at Dogwood issued a tweet asking why Trudeau is “spending $20 billion to build a new, 590,000 barrel-per-day export pipeline” if he expects his proposed fossil fuel emissions cap to curtail expansion in the tar sands/oil sands. But the Liberals also received a boost from Global Energy Monitor’s weekly CoalWire newsletter, after the party promised to phase out thermal coal exports by 2030 if it forms the next government.

“While Canada is a relatively minor exporter of thermal coal, the pledge is significant as the first time a country has added a promise to end thermal coal exports to its plan to phase out domestic coal power,” the newsletter stated.

The Trudeau Liberals also landed two major Green Party endorsements in the last week, and one of them was even intentional. Climate scientist and former B.C. Green leader Andrew Weaver endorsed the Liberals’ climate plan Thursday, CTV reported, in an online video that Trudeau’s campaign was quick to retweet.

“This is a plan that reflects the urgency and scale of the crisis,” Weaver said. “I’m extremely impressed at how ambitious the Liberal Party of Canada’s plan is and I’m confident that this is the right path for Canada.”

Curiously and unintentionally, Green Party leader Annamie Paul agreed at a Thursday afternoon news conference in Toronto Centre, the riding where she has spent virtually all her time during the campaign. “I’ll tell the people of Canada that if you want a real plan, one that is going to grow our economy, that is going to put us at the front of the competitive green economy of the future…the only option in this election for you is the Liberals,” she declared.

Paul later walked that back in a Twitter video, CBC reported. “It was bound to happen,” she said. “You do one press conference too many without having had your lunch, and there you go—saying things that are definitely, definitely good for a meme.”

NDP leader Jagmeet Singh faced continuing pressure over his position on the Trans Mountain pipeline, which terminates in the community he represents as MP for Burnaby South. In late August, after the Star had him pledging to cancel the project if his party formed a majority government (a prospect to which 338Canada attributes zero odds), Singh clarified his position in language that Burnaby Now found “a little fuzzy”.

A few days later, Dogwood’s Kai Nagata pointed out how awkward it is for the federal New Democrats to campaign on major resource extraction projects with a sitting NDP government in British Columbia and the prospect of a resurgent NDP in Alberta.

“The Liberals also know Jagmeet Singh’s NDP is handcuffed by its powerful provincial affiliates,” Nagata wrote. “The John Horgan wing of the party has overseen the arrests of more than 800 forest defenders since May, with Indigenous and Black activists targeted for especially brutal treatment by the RCMP. The B.C. NDP has also pushed ahead with the ruinous Site C dam, and more than doubled oil and gas subsidies since taking power in 2017. Meanwhile, Alberta NDP leader Rachel Notley is an aggressive supporter of the Trans Mountain pipeline and oil tanker project.”

All of which “gives Singh a very narrow runway to try to land the message that he is more committed on environmental issues than Trudeau—without contradicting Canada’s only NDP premier.”

Writing for The Georgia Straight, Vancouver family physician and climate activist Kevin Liang urged readers to support climate hawks like Anjali Appadurai (Vancouver-Granville) and Avi Lewis (West Vancouver-Sunshine Coast) as federal NDP candidates who would “put pressure on John Horgan’s climate crisis betrayal”. Leadnow is endorsing a slate of candidates across three parties, aiming to “elect courageous leaders” who “not only recognize the scale of these issues, but will rise up to respond with emergency-level action.”

Meanwhile, in an opinion piece for the Star, Clean Prosperity Executive Director Michael Bernstein argued Canada will need a charge on the carbon content of imports to remain economically competitive while meeting its climate targets. Heavy industry accounts for more than a third of Canada’s emissions, he wrote, and “right now, Canada applies a discounted carbon price to industrial firms in order to protect them from being undercut by competitors abroad that aren’t subject to carbon pricing.” Removing that price break would increase emission reductions by half.

“A move like this would only be feasible, however, if we can keep domestic firms on a level playing field with their international competitors, using border carbon adjustments,” he explained. “It’s pointless, for example, to force Canadian steel producers to pay for the carbon they emit from their blast furnaces if producers in countries without carbon pricing can export cheaper steel into Canada. The result could be to put Canadian steelmakers out of business, without reducing the overall emissions from global steel production.”

With that in mind, he said Canada must pay close attention to the Carbon Border Adjustment Mechanism taking shape in the European Union, to both create space for domestic industries to decarbonize and protect exporters from border adjustments elsewhere.