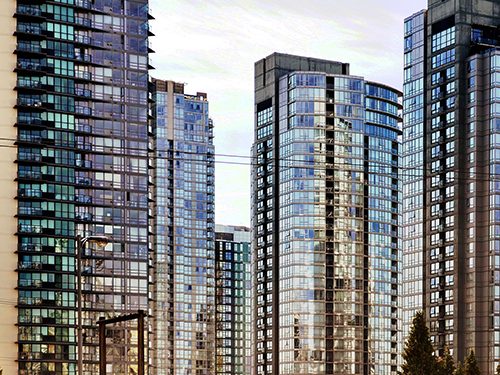 With Canada’s election day two short weeks away, the country’s Liberal, Conservative, and New Democratic parties are all making noises about increasing urban density as a solution to the climate and housing crises.

But with NIMBYism alive and well and provincial governments unable, or unwilling, to switch tracks away from urban sprawl, Canadian cities are left puzzling over how to get dense, says Globe and Mail architecture critic Alex Bozikovic.

The climate emergency dictates the need to solve that problem. Declaring a “very clear” link between denser urban neighbourhoods and reduced emissions, Bozikovic cites one American study suggesting that “doubling urban density brings down carbon dioxide emissions by 48% for travel and 35% for residential use.”

But Canadians by and large “live in car-oriented suburbs, and the fastest-growing cities in the country—Toronto, Calgary, Vancouver—continue to build more in their suburbs than nearer to their urban cores,” he writes. That’s partly due to policies dictated at the provincial level.

Case in point is Ontario’s Growth Plan, which outlines a clear intention to send 80% of newcomers, and the jobs that support them, out into new, car-oriented suburbs. “Of a projected 3.5 million new people by 2051, only 700,000 are directed into the City of Toronto,” writes Bozikovic, citing a recent growth outlook report for the province’s Golden Horseshoe region [pdf].

That funnelling is taking place despite the high demand for “walkable neighbourhoods”—at least among those who have not yet put down roots. Among the rooted, it is the desire to push back against change that’s high.

To change up the dynamic, Bozikovic suggests connecting the dots between housing, quality of life, and runaway climate change. And “the federal government has to play the heavy,” he adds.

Able to remain aloof from “neighbour-on-neighbour battles,” Ottawa “should be pushing urban municipalities to accept more people, taking the pressure off local elected officials.” In theory, he notes, the move should be popular, given that “most of us understand, at some level, that it’s undesirable to pave over green space and agricultural land for new housing and roads. Such development also generates emissions.”

Alert to such emergent awareness, the federal Liberals are proposing a Housing Accelerator Fund, a mechanism that “will send dollars to cities that approve more housing more quickly, and those that ‘encourage transit-oriented development’.” The Conservatives, meanwhile, “have a plank to tie transit funding to higher density,” while “the NDP promise to build large quantities of much-needed social housing.”